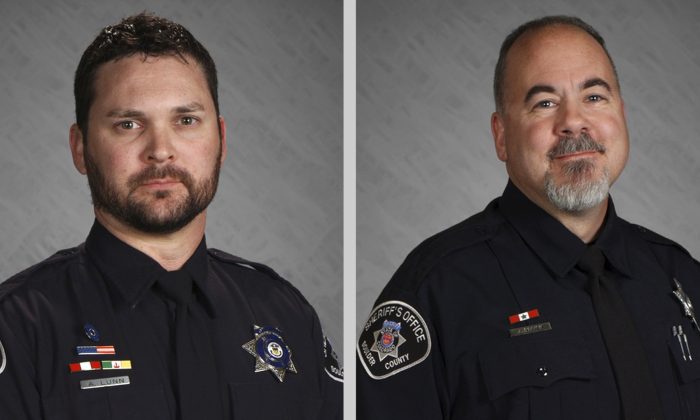 Two Colorado sheriff's deputies, O'Brien and Adam Lunn, have been charged with manslaughter in the death of a 23-year-old man that investigators found had been handcuffed and placed face down on the floor of a police van. (Boulder County Sheriff's Office via AP)
Crime and Incidents

DENVER—Two Colorado sheriff’s deputies were charged with manslaughter Monday, Feb. 4, in the death of a 23-year-old man they handcuffed and placed face-down on the floor of a police van while he was taken to a detox facility in Boulder, prosecutors said.

The man spent 16 minutes in that position as the deputies drove to the facility, investigators said. When they arrived, Demetrius Shankling was unconscious and not breathing. He died at a hospital 27 days later.

2 Boulder County deputies charged with manslaughter in death of intoxicated man on his 23rd birthdayhttps://t.co/dRGIQJHQhY pic.twitter.com/Fb8QDzfTPo

Boulder County prosecutors filed the manslaughter charges against deputies Adam Lunn and James O’Brien. It was not immediately clear if they had attorneys to comment.

They were expected to surrender Monday.

The county’s coroner classified the death as a homicide, saying Shankling had been placed “into this position by another person(s).” An autopsy determined his death was caused by positional asphyxia combined with the effects of drinking and amphetamine.

Court records say Shankling left a downtown Boulder bar around 2 a.m. on his 23rd birthday. Friends who left with him said they were helping him walk down the street when he fell or jumped into a bush.

Boulder police officers then approached the group. Lunn and O’Brien told investigators that they were called to take Shankling to a detox facility in a transport van.

Video footage reviewed by investigators shows the deputies cuffing Shankling’s hands behind his back when they arrived. He was “verbally antagonistic” and would not step into the van, court records said.

The deputies put him in the rear compartment, sliding him “head first into the van on his stomach and forced the doors closed,” the records state.

Shankling , who was 6 feet tall, was “physically compressed” into a space less than 5 feet long, according to a detective with the Longmont Police Department who investigated the case.

The van’s surveillance footage didn’t show the deputies turning him on his side or trying to lift Shankling onto a bench seat where he could be secured upright, court records said.

The deputies should have known to take those steps based on training they received, the records state.

Trainers who led those classes told investigators that they warn police not to leave someone on their stomach any longer than necessary due to a risk of breathing problems.

Boulder County Sheriff Joe Pelle called Shankling’s death “a tragedy to all involved.” He said the deputies have been on paid administrative leave since Sept. 9.

“As part of our public safety mission, all deputies are responsible for safeguarding those in our care to the best of our ability and are accountable for our decisions and actions,” Pelle said.