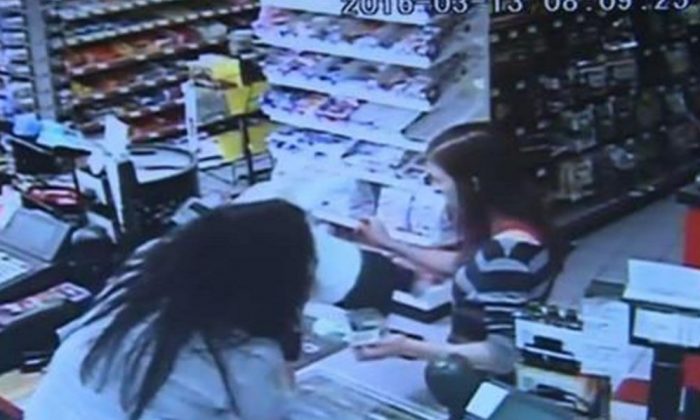 THE MOMENT: The cashier grabbed the baby right as the woman collapsed (YouTube/screenshot)
Crime and Incidents

A Colorado clerk has rescued a baby just seconds before the child’s mother collapsed from a seizure.

The incident on Sunday was captured via a surveillance camera inside the convenience store in Arvada, Colo., according to KDVR-TV.

The mother can be seen picking up a soda and taking it to the counter.

However, Cashier Rebecca Montano said something seemed off about the woman.”She came up to pay for an item and I was talking to her and trying to make the baby smile,” Montano told ABC7. “All of the sudden she had a blank look on her face and I sensed something was very wrong.”

Instinctively, she reached over the counter and grabbed the baby’s arm right before the mother started to wobble.

The mother then tumbled to the ground, and she “hit her head badly,” Montano added.

“I just wanted to save the baby from getting hurt,” Montano, a mother of five, told 9 News. “If she would’ve fallen with the baby in her arms, who knows where that baby would’ve landed?”

Later, the woman came back to thank Montano.

“The police said I did the right thing by taking the baby because if she had fallen with the baby it could have been really bad,” Montano told ABC7.