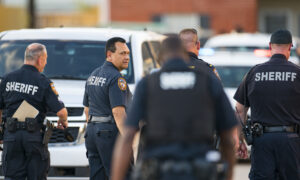 The Colorado State Capitol building was locked down on Thursday after shots were fired at the Civic Center Park nearby.

Two suspects was arrested following the incident, according to Denver police.

“DPD responds to shots fired at Civic Center Park. 2 suspects arrested a few blocks away. No one struck. No injuries,” it said.