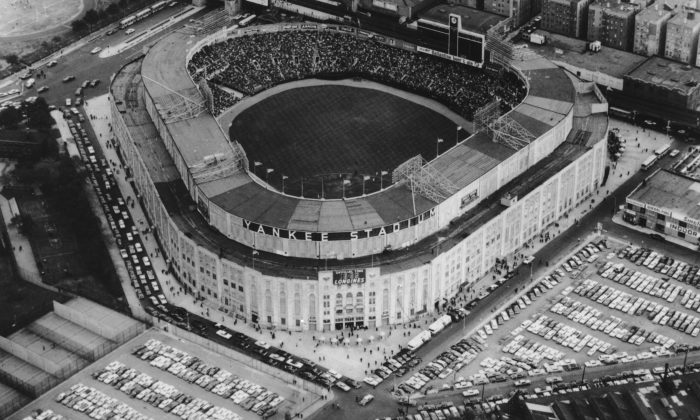 Yankee Stadium in the Bronx, New York City, circa 1965. The stadium is the home of the New York Yankees baseball team. (Agence France Presse/Getty Images)
12- OBSOLETE

In the tenth year of the Great Depression, Colonel Jacob Ruppert, was one of the few who prospered big time while the economy of the nation collapsed.

Part of that prospering came from his business acumen—the good sense to buy New York City property at depression prices like the former Bank of United States Building, at Fifth and Forty-fourth in 1931, the Commerce Building, at Third and Forty-fourth, in 1932, a competing brewery in an area bounded by Second and Third Avenues, and Ninety-second and Ninety-fourth Streets, just east of his own.

By 1935, all his property holdings had more than doubled in value. As the decade of the 30s neared its end, his real estate holdings were valued at $30 million, his total estate at double that amount.

He still had the world by a string. Then the string snapped.

Strangely and sadly, the normally vigorous Colonel attended just two games at Yankee Stadium during the 1938 season. He followed his beloved Yankees from a sickbed, listening to games on the radio for the first time. So impressed was he by the medium’s fit with baseball that he arranged for all Bronx Bomber home games to be broadcast on radio. That was his final official act.

On Friday morning January 13, 1939, the master builder of the New York Yankees empire passed away at his home from complication from phlebitis. He was 71 years old.

Aside from close relatives and medical attendants, the last person to see Ruppert alive was Babe Ruth. At 7 P.M. on January 12th, the Colonel was in an oxygen tent where he had been for several hours. After removal from the tent the first thing he said, according to his nurse, was: “I want to see the Babe.”

The dying man opened his eyes, reached out his hand to the “Big Bam.” He murmured only one word, “Babe.”

Ruth said: “It was the only time in his life he ever called me Babe to my face.”

On Monday January 16, 1939, the procession that resembled a state funeral started out from the Ruppert apartment on 93rd Street in Manhattan. More than 4,000 jammed inside the historic St. Patrick’s Cathedral including brewers, public dignitaries, the bosses of the Tammany and Bronx Democratic machines, more than 500 Ruppert employees, fans and family.

More than 10,000 people were outside the Cathedral. The service ran for about an hour. The family was represented by one brother, two sisters, two nephews, and four nieces. They sat in the front left pew. Dignitaries Mayor Fiorello H. LaGuardia, United States Senator Robert E. Wagner, former New York State governor Al Smith sat in the front right pew.

After the ceremony a fifty car cortege headed to Kensico Cemetery in Westchester County where Colonel Jacob Ruppert’s burial was in the family mausoleum.

A vast fortune was basically left to three women.

And one-third of the estate was left to a former chorus girl Helen Winthrop Weyant, 37. Her name had never appeared in the press before. She lived on 55th Street in Manhattan with her mother. She was described in newspapers as a “ward,” as “formerly a chorus girl,” and by The Sporting News as “a former showgirl friend.”

Claiming she had met the Colonel about 14 years before his death, Weyant told reporters that that she had “no idea why he left her so much money.”

The New York Yankees would play on through the decades under new ownerships. And it would not be until 2013 that Colonel Jacob Ruppert, the man who created the Yankee Empire, would finally and deservedly be admitted to the National Baseball Hall of Fame in Cooperstown, New York.