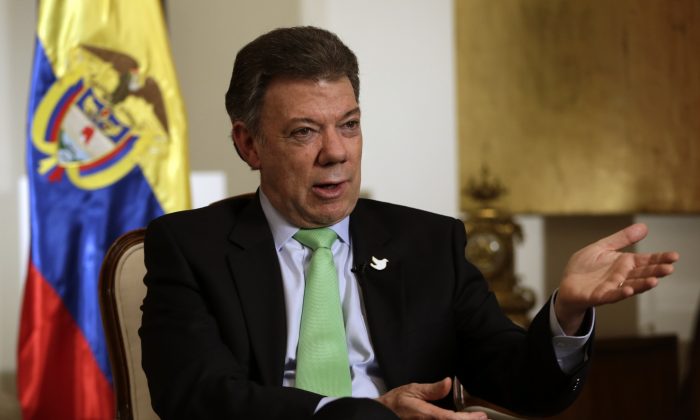 BOGOTA, Colombia—Saying that “peace is near,” Colombian President Juan Manuel Santos announced a surprise trip Wednesday to Cuba for a key meeting with government peace negotiators trying to wrap up talks aimed at ending the country’s long-running conflict.

Colombia has been abuzz in recent hours with speculation that the government and negotiators for the Revolutionary Armed Forces of Colombia have reached a tentative agreement on the thorny issue of how to punish rebel commanders accused of human rights abuses.

If confirmed, it would be a major breakthrough in the talks and remove the last remaining major obstacle to a final deal to end a half-century of bloody, drug-fueled fighting.

As part of talks in Cuba stretching over more than two years, both sides had already agreed on three previous points: land reform, political participation for guerrillas who lay down their weapons and how to jointly combat drug trafficking. Even in advance of a deal, they’ve also begun work on a program to remove tens of thousands of rebel-planted land mines

But one issue seemed almost insurmountable: How to punish FARC commanders for human rights abuses in light of stricter international conventions to which Colombia is a signatory and almost unanimous public rejection of the rebels.

The FARC have long insisted they aren’t abandoning the battlefield only to be treated as criminals and demand that any vulnerability to prison time be shared with the leaders of Colombia’s military, which has a litany of war crimes to its name as well, and with the nation’s political elite.

On Tuesday, Santos dispatched his negotiating team to Cuba ahead of the next round of talks and then further fueled speculation of an imminent deal.

3/8Some people on both sides will be unhappy. Some want more peace, others want more justice,3/8 Santos said in a speech Tuesday night. 3/8Not everyone in the world will be content, but I*m sure in the long run we*ll be much better off.3/8