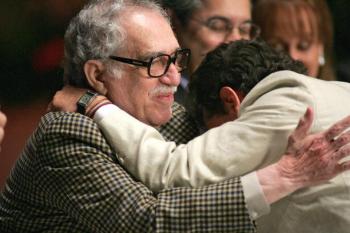 Hollman Morris has an influential television show in Colombia called "Contravia," which documents the human rights atrocities taking place in the battle between Colombia’s left-wing FARC and its right-wing paramilitary groups.

“Morris has produced journalism critical of the Colombian government, and that appears to have been a factor in why the State Department took the extraordinary step of preventing an honored journalist from entering the country,” wrote Joshua Benton on the Nieman website.

The Colombian news media has done a good deal to publicize the violence committed by FARC but has done little to uncover the paramilitary group's role.

The paramilitary forces were initially created when a group of landowners decided to create their own military defenses against the FARC, whose operations have made Colombia the second highest number of displaced peoples in the world.

"Contravia" uncovered the right-wing paramilitary’s connection to cocaine dealers, which it said are now largely funding their operations.

Human Rights Watch awarded Morris a Human Rights Defender Award in 2007 for his dedication “to uncovering the truth about atrocities committed on all sides: by right-wing paramilitaries, left-wing guerrillas, and government authorities.”

Human rights organizations such as the American Civil Liberties Union, journalist protection agencies and American Association of University Professors and PEN American Center have spoken out against the State Department’s decision to deny Morris a visa.

The Colombian government dubbed Morris a terrorist after a group of hostages were released following a visit he made to a FARC hostage site for a documentary he was making. “Uribe himself denounced Morris to the national press, and implied he was a member of the “intellectual bloc” of the FARC,” according to the Harvard source.

Such allegations connecting journalists to either side of a violent political conflict puts the life of journalists in serious danger, warns Human Rights Watch. The organization has urged the U.S. State Department and Colombia’s President Uribe to retract the comments.

The International Federation of Journalists said Morris was cleared of the allegations by an investigation by the Colombian attorney general’s office.