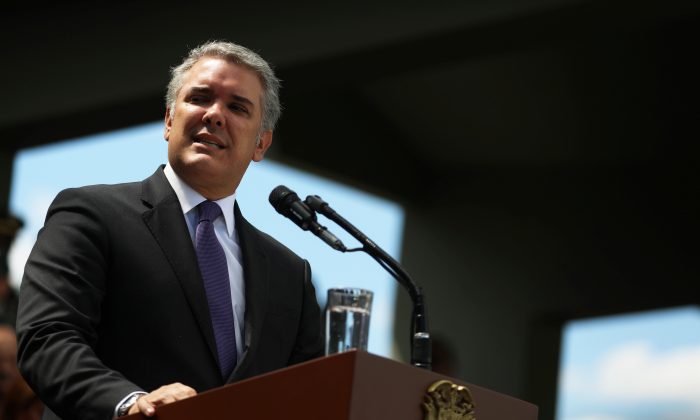 BOGOTA, Colombia—The Colombian government has discovered a plot to assassinate President Iván Duque and has arrested three Venezuelans in relation to the plans, according to Colombian Foreign Minister Carlos Holmes.

The plot was uncovered by national intelligence services, said Minister Holmes in a video message published on Jan. 29. He added that intelligence services had been monitoring possible plans to kill the president “for months” and that they arrested three Venezuelans found possessing “weapons of war.” The development “increases concerns yet further,” he said.

The Ministry for Defense has since informed local media that two of the suspects were found in the coastal city of Valledupar carrying long-range assault rifles, while the third was picked up in Barranquilla carrying a submachine gun and a grenade. A local radio station reported that the plot was to have coincided with the second inauguration of Venezuelan President Nicolas Maduro on Jan. 10 and was likely backed by armed groups in Colombia. It isn’t clear about which sources the claims were based.

Neither Holmes nor the Foreign Ministry have disclosed details about how the plans were detected, or what the alleged links with the three individuals in custody. Holmes thanked unspecified foreign nations for helping to investigate the assassination plot against the conservative leader.

Reuters has since reported that Israel, the United Kingdom, and the United States are collaborating with investigations.

Relations between the neighboring Latin American nations have been particularly sour in recent months, with both countries expelling the other’s officials and the landing of nuclear-capable Russian bomber jets in Venezuela on Dec. 10.

The deterioration in diplomacy has followed the collapse of Venezuela, as it faces widespread food and medicine shortages alongside hyperinflation and widely reported human-rights violations.

Maduro has attributed the deteriorating conditions to planned intervention from other countries and has alleged that Colombia—alongside the United States—is plotting to oust him and his government. Duque has continually rejected the legitimacy of the second election of Maduro, who he calls a “dictator.”

“It is very likely that tensions between Colombia and Venezuela are going to be on the rise, particularly with Maduro’s inauguration on the horizon,” Sergio Guzman, a political risk consultant in Bogotá, said.

Guzman says it may be premature to link the arrests with either the Venezuelan government or any particular organization.

“The weapons that these individuals were caught with are not uncommon in Colombia, so it’s going to be very difficult to establish motives or the group behind this. It’s very early to prompt a diplomatic incident with the information on hand,” Guzman added.

Venezuelan Foreign Minister Jorge Arreaza has since responded to the claims, offering to support the investigations.

“We have been trying to contact you to offer the necessary police and intelligence cooperation, in order to investigate your complaint about alleged plans to threaten the life of Iván Duque,” Arreaza wrote on Twitter to his Colombian counterpart.

Although first appearing to make an attempt to potentially rebuild bridges, Arreaza didn’t miss the opportunity to stoke diplomatic flames.

“We hope that this necessary police cooperation also serves so that the parties responsible for the frustrated assassination attempt against President Nicolas Maduro on Aug. 4th are investigated and apprehended,” he added.

U.S. Foreign Secretary Mike Pompeo will visit Colombia on Jan. 2 amid rising tensions between the two Andean nations. Alongside diplomatic strategy, a means of dealing with the Venezuelan migration crisis is also expected to be on the agenda.

More than 3 million Venezuelans have fled for other Latin American nations as its economic and political crises deepen, with over half estimated to have found shelter in Colombia.