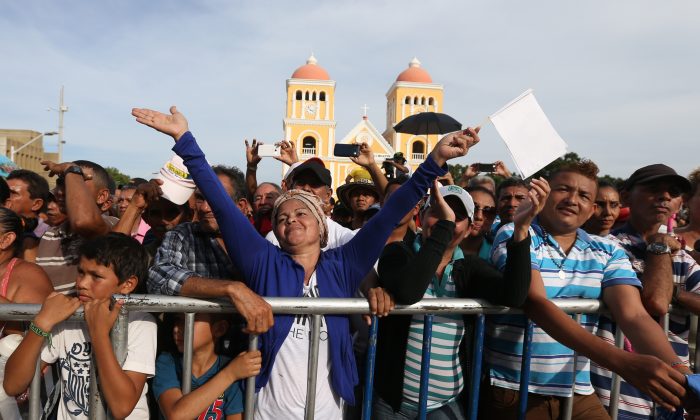 People enjoy a concert for peace in Carmen de Bolivar, Colombia, Sunday, Sept. 25, 2016. Colombia's government and the Revolutionary Armed Forces of Colombia, FARC, will sign a peace agreement to end over 50 years of conflict, in Cartagena, on Monday. (AP Photo/Fernando Vergara)
Americas

CARTAGENA, Colombia—Colombia will take a big step toward emerging from its long nightmare of bloody violence Monday when the government and the country’s largest rebel movement sign a peace accord that emerged from four hard years of negotiations.

The significance of the deal can’t be overstated: Colombia’s five-decade conflict, partly fueled by the nation’s cocaine trade, has killed more than 220,000 people and driven 8 million from their homes.

Underlining the importance of the day, the pact is being signed by Colombian President Juan Manuel Santos and by the top commander of the Revolutionary Armed Forces of Colombia, a rebel fighter known by the alias Timochenko. Fifteen Latin American presidents, U.N. Secretary-General Ban Ki-moon and U.S. Secretary of State John Kerry are scheduled to witness the signing in the colonial Caribbean city of Cartagena.

The ceremony late Monday afternoon will be charged with symbolism. The more than 2,500 guests have been invited to wear white as a sign of peace, and Santos will put his signature on the 297-page accord with a pen made from a recycled shell used in combat.

The signing won’t close the deal, though. Colombians are being given the final say on endorsing or rejecting the accord in an Oct. 2 referendum. Opinion polls point to an almost-certain victory for the “yes” vote, but some analysts warn that a closer-than-expected finish or low voter turnout could bode poorly for the many challenges the country faces implementing the ambitious accord.

Among the biggest and most controversial steps will be judging the war crimes of guerrillas as well as state actors. Under terms of the accord, rebels who lay down their weapons and confess their abuses will be spared jail time and allowed to provide reparations to their victims by carrying out development work in areas hit hard by the conflict.

The government has also committed itself to addressing unequal land distribution, which has been a longstanding FARC demand harkening back to its roots as a peasant army in 1964, and the administration agreed to work with the guerrillas to provide alternative development to tens of thousands of families that depend on the cocaine trade.

Only if the accord passes the referendum will the FARC’s roughly 7,000 fighters begin moving to 28 designated zones where over the next six months they are to turn over their weapons to U.N.-sponsored observers.

The rebels were forced to the negotiating table after being pushed to the edge of Colombia’s vast jungles by a decade-long, U.S.-backed military campaign that claimed the lives of a number of its top commanders.

Negotiations, which had been expected to take a few months, stretched over more than four years and had to overcome a number of crises, from the military’s killing of the FARC’s then top commander, known as Alfonso Cano, shortly after he authorized a secret backchannel with the government to the rebels’ capture of an army general who until a few months ago would have been a trophy prisoner.

“What’s good about the fact that it lasted four years is that it was a very thorough process,” Norwegian Foreign Minister Borge Brende told The Associated Press in an interview ahead of the ceremony. Norway and Cuba were co-sponsors of the negotiation that began in Oslo in 2012 and then shifted to Havana.

“The mindset of everyone has changed,” Brende said. “I feel very genuinely that President Santos and Commander Timochenko want this to work and not go into the blame game.”