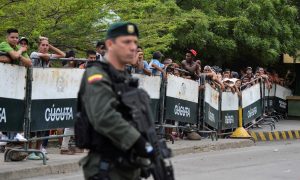 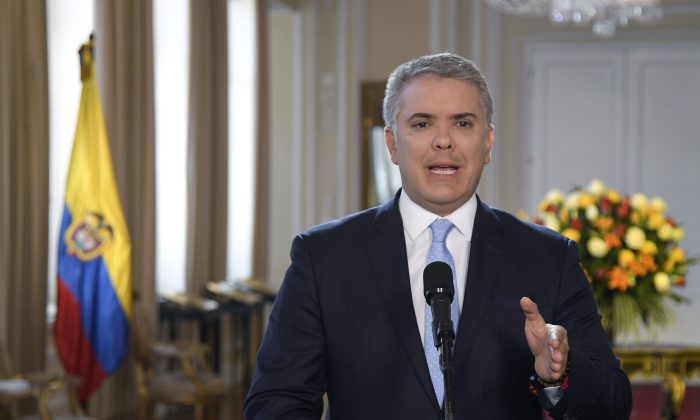 Colombia FARC Negotiators Say They Are Taking Up Arms Again

BOGOTA, Colombia—Colombian President Ivan Duque offered a nearly $1 million reward for the arrest of the top peace negotiator for the Revolutionary Armed Forces of Colombia on Aug. 29, after the former rebel commander and a small cadre of hardliners vowed to resume their insurgency, in a major reversal for the country’s efforts to end decades of bloody fighting.

In a televised address, Duque also accused Venezuela’s socialist leadership of providing safe haven to the rebels—underscoring the risks to regional stability from the rebels’ announcement they would rearm.

In a video published on Aug. 29, Luciano Marin appeared alongside some 20 heavily armed insurgents in camouflaged fatigues to condemn the conservative Duque for standing by as hundreds of leftist activists and rebels have been killed after demobilizing as part of the peace deal.

“When we signed the accord in Havana, we did so with the conviction that it was possible to change the life of the most humble and dispossessed,” said Marin, better known by his alias Iván Márquez, in the more than 30-minute video. “But the state hasn’t fulfilled its most important obligation, which is to guarantee the life of its citizens.”

Marin read the lengthy prepared remarks from what appeared to be an established guerrilla camp in what he said was Colombia’s eastern jungles.

But Colombian authorities swiftly claimed the video was shot in neighboring Venezuela—long a strategic rearguard for the rebels and whose socialist government the Trump administration and several conservative U.S. allies, especially Duque, have been seeking to remove.

“We’re not witnessing the birth of a new guerrilla army, but rather the criminal threats of a band of narcoterrorists who have the protection and support of Nicolás Maduro’s dictatorship,” Duque said. “We won’t fall into the trap of those pretending to shield themselves behind false ideological clothing to sustain their criminal structure.”

The decision to return to arms was overwhelmingly rejected by Colombians, many of whom believe the rebels benefited from a sweetheart pact of impunity. It comes as the peace process is at risk of unraveling because of what critics see as its slow implementation and a surge in killings of social leaders in far-flung rural areas where the rebels had long been dominant.

With two pistols strapped to his belt, Marin pledged a “new phase” in Colombia’s armed conflict and vowed to seek alliances with another rebel group, the National Liberation Army, or ELN. Standing with him were several former FARC leaders, including ideologue Seuxis Hernández, alias Jesús Santrich, who abandoned the peace process after prosecutors in New York ordered his arrest on drug charges.

Venezuela’s Maduro said in July that the fugitive rebel leaders would be welcome in his nation and for months, Colombian military intelligence has alleged that Marin, Hernández, and several top ELN commanders were hiding out in the neighboring country.

Patricia Linares, head of the special peace tribunal investigating the FARC’s crimes, indicated that magistrates would move quickly to strip the deserting rebels of benefits under the peace deal. Under the accord, rebels who confess their involvement in war crimes such as the kidnappings of civilians and recruitment of child soldiers will be spared jail time and protected from extradition to the United States, which has charged the FARC’s top leadership with cocaine trafficking.

“Whoever rearms will be expelled,” Linares said.

It’s unclear how the decision by Marin to rearm will affect Colombia’s delicate security balance. More than 90 percent of the 13,060 ex-combatants and civilian supporters who handed over weapons to United Nations observers in 2016 continue to live up to their commitments under the peace deal.

But a group of dissident FARC commanders never demobilized and have seen their ranks swell to around 2,500 fighters through recruitment. They continue to terrorize isolated rural communities, especially along Colombia’s borders with Venezuela and Ecuador, profiting from a booming cocaine trade in those areas.

In addition, the more radical ELN has filled the void left by withdrawing FARC rebels and stepped up attacks in cities, including the car bombing of a police academy in Bogota that killed 22 people.

Marin’s move is “better late than never,” said an ELN commander in Colombia’s western jungle who goes by the alias Uriel. The fighter released video footage on social media in which he appeared along a river with his face masked and fist clenched in the air.

Rodrigo Londoño, who had been the FARC’s top military commander and now heads its legal political party, immediately distanced himself from his former comrades, with whom relations have been strained in the past year. In an interview with Blu Radio, he apologized to his fellow Colombians and the international community, saying that the vast majority of rebels remain committed to the peace process despite rising security risks.

“I have mixed feelings,” said Londoño, who is better known by his alias Timochenko. “It’s an unfortunate development, but at the same time, it leaves things clearer and ends the ambiguity because we had been facing a complex situation for some time.”

Duque’s peace commissioner, Miguel Ceballos, called for swift action from the peace tribunal while calling on prosecutors to seek the rebel leaders’ arrest. At a press conference in Washington, he also lashed out at what he said was “clear support by the dictator Nicolás Maduro” for the rebels.