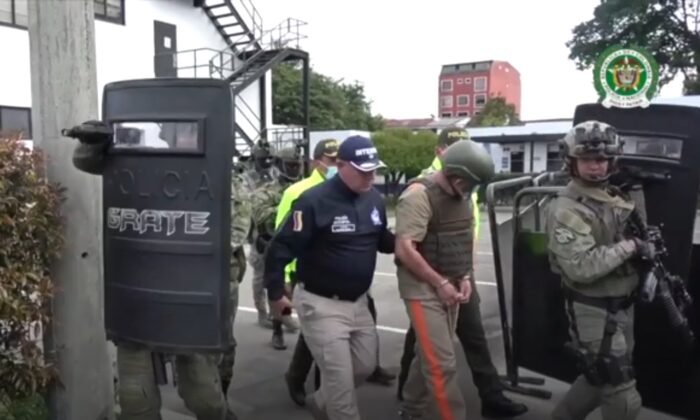 Police escorting Dairo Antonio Úsuga David, in Bogota, Colombia, on May 4, 2022. (Colombian National Police via AP/Screenshot via The Epoch Times)
Crime and Incidents

Colombia Extradites Feared Head of Gulf Clan to US

Colombia extradited the alleged head of the feared Gulf Clan to the United States Wednesday where he faces indictments in three federal courts.

Dairo Antonio Úsuga David had been the country’s most-wanted drug trafficker before his capture in October 2021.

Colombian President Iván Duque said he is “comparable only to Pablo Escobar,” referring to the late former head of the Medellin drug cartel.

Duque said Úsuga David was also pursued in Colombia for sexual abuses against minors, the killing of environmental and social activists, as well as for the killing of police officers.

The former rural criminal had stayed on the run for more than a decade by corrupting state officials and aligning himself with combatants on the left and right.

He was transferred Wednesday in handcuffs and wearing a helmet and a bulletproof vest from a prison in Bogotá to a heavily guarded military transport air field.

He’s long been a fixture on the US Drug Enforcement Administration’s most-wanted list.

He was first indicted in 2009, in Manhattan federal court, on narcotics charges and for allegedly providing assistance to a paramilitary group designated a terrorist organization by the US government.

Later indictments in Brooklyn and Miami federal courts accused him of importing into the US at least 73 metric tons of cocaine through Venezuela, Guatemala, Mexico, Panama, and Honduras.

Úsuga David has also cycled through the ranks of several guerrilla groups, most recently claiming to lead the Gaitanist Self Defense Forces of Colombia after a mid-20th century Colombian leftist firebrand.

His victims argued that him leaving Colombia would violate their rights to justice and reparation in over 128 proceedings.

A court later dismissed this argument and a temporary suspension of the extradition.

Duque said that after facing a trial for drug trafficking in the US, Úsuga will return to “Colombia to pay for the crimes he committed.”