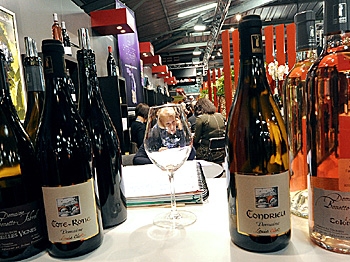 A visitor is pictured through a glass of wine at a stand on February 23, 2010 in Montpellier, southern France, at an international exhibition of Mediterranean wines and spirits. Europe wants to expand its market into South America in a free trade deal. (Gerard Julien/AFP/Getty Images)
International

A new deal, which is expected to be ratified next year, will provide free trade between the two Latin American countries and the 27-country European bloc.

Peru and Colombia want to increase exports of their agricultural products, while the European nations are interested in the Peruvian and Colombian markets for wine, dairy products, and cars.

The European Union is the second largest trading partner of the Andean region, which includes Ecuador and Bolivia, with total trade worth about US$24.3 billion in 2008. Peru also opened a free trade with China on Monday.