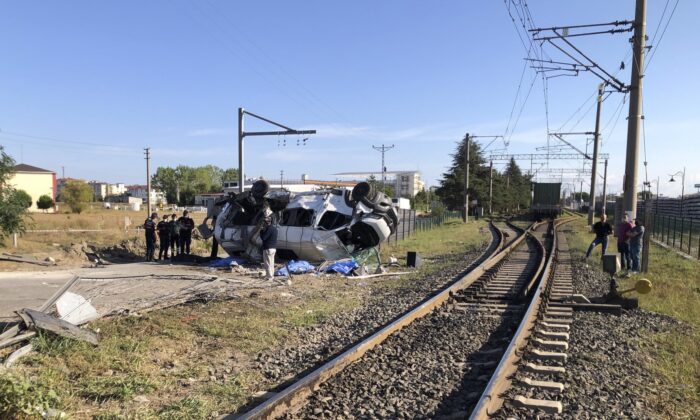 ISTANBUL—A collision between a freight train and a minibus in northwest Turkey killed six people and injured seven others Saturday, the Turkish news agency Demiroren reported.

The crash at a railroad crossing in Ergene, Tekirdag Province, involved a minibus carrying textile factory workers returning from a night shift and a train headed to nearby Cerkezkoy at 8 a.m., the news agency said.

The people who died were all in the minibus, which was dragged in front of the train after the impact. Images showed the crumpled vehicle lying on its roof alongside the train tracks. Footage from street cameras aired by TV news channels showed the minibus driver maneuvering around a lowered barrier to cross the tracks before the train struck the vehicle.

In 2018, 25 people died when a passenger train derailed in nearby Corlu. That accident was blamed on heavy rain causing an embankment to collapse.

Last year, Turkey’s Chamber of Mechanical Engineers said railway accidents in the country were three times the global average, while labor unions warned that cost-cutting has led to safety issues.