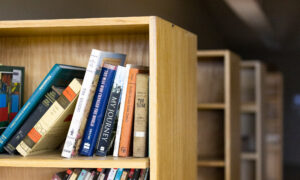 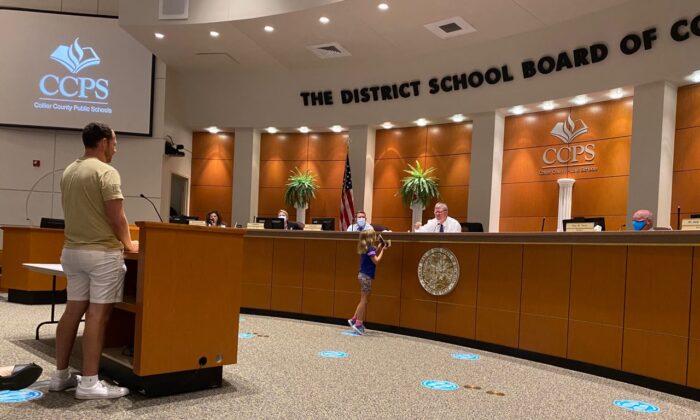 Dan Cook addresses the Collier County School Board regarding his concerns of CRT content in textbooks as his daughter Selah distributes Pocket Constitution booklets to each member in the district’s classrooms, on May 7, 2021. (Patricia Tolson/The Epoch Times)
Regional News

On June 7, the Collier County School Board (CCSB) in Flordia convened a public hearing to discuss textbooks being considered for adoption by their respective districts. They also heard comments from angry citizens regarding concerns of possible Critical Race Theory (CRT) content in those textbooks.

The hearing was attended by approximately 60 Collier County residents. Among them were the 15 citizens who had registered to have three minutes to address the board directly. While thirteen of those registered to provide comments were angry citizens who adamantly oppose the adoption of the textbooks—which they believe opens the door for teachers to indoctrinate their children with CRT—two were Collier County educators, who insisted there was nothing to fear.

Prior to the meeting, Chad Taylor, a retired Marine and Naples resident, told The Epoch Times he first became involved in monitoring the activities of the CCSB due to his objection to their mask mandates. Taylor has an autistic son who cannot wear a mask for health reasons and he believes the board should have no authority to force children to wear masks. Now Taylor said the board’s overreach has spiraled into other things like promoting CRT in the classroom.

“It focuses more on our differences than what we have in common,” Taylor said, “and that’s what they’re going to poison our children with unless we stand up and do something. It’s atrocious.”

“This is important because it affects our children,” Rick Stevens, one of the founding directors of Florida Citizens Alliance and pastor of Diplomat Wesleyan Church in Cape Coral, Flordia, told The Epoch Times. “Too many people haven’t been paying attention to what school boards do and we all know that our elected officials will do whatever they can get away with. So it’s time for us to pay attention because what our children learn in school is what they live out later in life.”

Bill Oppenheimer was the first citizen to address the board, sharing a letter he had already sent to them, in which he said CRT is “a tool Marxists are using to destroy our country by dividing us rather than uniting us.”

His sentiments would be echoed by nearly every citizen who stood to address the board.

Dan Cook told The Epoch Times he was at the meeting to object to the textbooks and what was being taught in the classrooms. As he addressed the board directly, his daughter Selah distributed pocket Constitution booklets to each member of the CCSB. A video of Selah addressing the CCSB at a prior meeting regarding their mask mandate had already gone viral on the internet.

“I think these masks are horrible,” Selah told The Epoch Times. “Why does the school board even do this to children? How would they feel if we forced masks on them?”

Cook’s suggestion that schools eliminate CRT material from the classrooms and replace it with the content of the United States Constitution was met with enthusiastic applause.

Chad Taylor, who has previously spoken with The Epoch Times, directed the board’s attention to a book called “D is for Democracy,” which is currently being used in Collier County schools.

“This book teaches kindergarteners that the United States is a democracy, yet we’re a constitutional republic,” Taylor attested, adding that the book contains “a strong bias toward centralized government, when our Founding Fathers wanted a weaker central government.”

Another parent brought a teacher’s guide to the board’s attention. The teacher’s guide instructs teachers on how to present the information provided in the textbooks. Unlike textbooks, the Florida Board of Education does not require that teacher’s guides be made available to the public for review and consideration.

For the subject regarding the importance of inventions—such as the light bulb by Thomas Edison and the computer by Steve Jobs—teachers are encouraged through the teacher’s guide to promote the idea that higher taxes are a good thing because higher taxes means the government can provide funding for inventions. However, despite history clearly reflecting that the development of the light bulb and the world’s first computer were funded strictly by their inventors, the guide encourages teachers to imply that it is only through government funding that inventions such as these are made possible.

Among the five “objectors” given 20 minutes to address the board, Keith Flaugh—founder of Florida Citizens Alliance—cited the 1619 Project, which he insists is historically inaccurate and defines the United States as inherently racist.

According to Pulitzer Center—which provides a selection of “guides” teachers are encouraged to use in their classrooms—the 1619 Project began when The New York Times published an article suggesting the United States change its founding date to when the first Africans arrived on Virginia soil.

In his closing remarks, Blount made it clear that he disagreed with the teachers who dismissed the historical inaccuracies in “D is for Democracy” because it is only a supplemental “reader,” and not a “textbook.”

“Instructional materials shall be understood to mean those items having intellectual content that by design serve as a major tool in the instruction of a subject or course,” Blount recited from the Florida Education Code (pdf), noting that the “very broad” definition of “instructional materials” would have to include the “reader.”

He also asked to see the teacher’s guide and discovered that the foreward had been written by Dr. Tyrone Howard. The Epoch Times previously reported on how Howard is a known advocate of CRT who encourages teachers to promote the tenets of BLM in the classroom.

“Without the user guide, you might not know that the foreward was written by Tyrone Howard,” Blount noted. “You might decide that’s important or not important. But you need to know it.”

The Epoch Times reached out to the office of Gov. Ron DeSantis to inquire if he had completed his promised review of the textbooks being considered for use in Florida’s schools. On Tuesday, Press Secretary Christina Pushaw confirmed that “a thorough review of all adopted ELA (English Language Arts) curriculum material was done, and there is zero CRT in the adopted materials that will be used in Florida schools.”

However, Pushaw noted the same conclusion expressed by Blount about the use of “supplemental materials,” was shared by DeSantis.

“It’s important to note that Florida statutes require school boards to give the public a chance to review and contest the adoption of curriculum, including materials that a school district might adopt that are supplemental to state-approved materials,” Pushaw clarified to The Epoch Times. “Supplemental materials are not one and the same as the curriculum approved by the Florida Department of Education.”

It was also revealed at the hearing that the publisher of many books being considered by the CCSB—Houghton Mifflin Harcourt—had posted a “commitment” to BLM. For this, and other reasons revealed at the hearing, the board unanimously accepted Blount’s suggestion that they postpone their decision regarding the adoption of any books until these matters could be addressed.