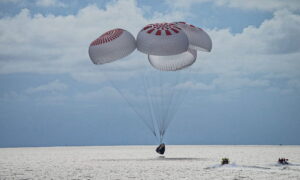 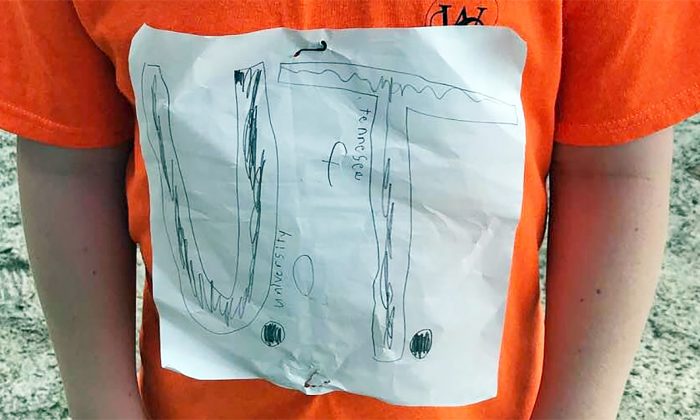 An Altamonte Elementary School student shows his home made t-shirt label in Altamonte Springs, Fla., on Sept. 5, 2019. (Courtesy of Laura Snyder/Facebook)
US News

A Tennessee public university will sell an elementary student’s T-shirt design after he was bullied for wearing it to College Colors Day last week because he didn’t own a real team shirt.

The University of Tennessee Volunteers (Vols) football team said it will now offer the design that a Florida elementary school student made at home as part of its merchandise line.

Share in a Florida elementary student’s Volunteer pride by wearing his design on your shirt too! Pre-order today for a late September expected delivery. A portion of proceeds from every shirt sold will be donated to @STOMPOutBullyng .https://t.co/NdnTtYREFL pic.twitter.com/OeTZvgC09Y

The announcement comes just days after the student’s teacher, Laura Snyder, revealed on social media that some female students had allegedly made fun of the hand-drawn logo the boy’s had pinned to his orange t-shirt so he could support his team on College Colors Day at Altamonte Elementary School in Altamonte Springs, 12 miles north of downtown Orlando.

Snyder felt especially disappointed by the girls’ behavior because she knew how “excited” the boy was to show his orange shirt with his very own logo design.

“After lunch, he came back to my room, put his head on his desk and was crying … he was devastated,” she said on Facebook. “I am aware that it’s not the fanciest sign but this kid used the resources he had available to him to participate in a spirit day … I plan to get him a [real] University of Tennessee shirt but was wondering if anyone has any connections to the University of Tennessee?”

Much to her surprise, the post went viral and was liked more than 13,000 times, commented on 4,000 times, and shared 7,000 times. The social media post eventually reached the university’s senior leadership team who offered to mail the boy a whole collection of Vols memorabilia, including a shirt, jersey, backpack, tote bag, notebook, folder, baseball cap, and giant sports hand, among others.

“You are a shining example of what the volunteer spirit is all about,” UT Vol shop marketing manager Tommi Gruees said in a thank you card obtained by Snyder. “I hope you enjoy your new Vol gear, hope to see you on campus one day, keep your head held high, and let your spirit shine.”

The social media post eventually reached the desk of the UT chancellor Donde Plowman who invited the boy to become an official Vol. The name “Volunteers” takes after Tennessee’s nickname as the Volunteer state, adopted after the war of 1812.

“We would love you to come be a Volunteer,” Plowman said in a thank you card. “Wear this t-shirt and cheer for the Vols.”

As soon as the gifts arrived, the boy wasted no time in unwrapping and using them.

“It was so heartwarming, my student was so amazed at all the goodies in the box,” Snyder said on Facebook. “He proudly put on the jersey and one of the many hats in the box. All who saw [it] had either goosebumps or tears while we explained that he had inspired and touched the lives of so many people.”

The student also shared some of his gifts like bracelets, water bottles, and towels with his classmates who quickly became “ecstatic” and showed their appreciation, leaving Snyder confident that he will not have trouble for many College Colors Days to come.

“It made this teacher so proud to see the kids congratulating my student, high fives, hugs, pats on the back could be seen from the kids,” Snyder said. “This experience is uniting my class even more than I could have imagined and it was truly amazing to witness, the Vols spirit was definitely felt in my classroom … the Vols Nation has made sure he will be set for college colors day for quite some time.”

“When I told him that his design was being made into a real shirt and people wanted to wear it, his jaw dropped,” Snyder said. “He had a big smile on his face, walked taller, and I could tell his confidence grew … thank you to the UT Nation for that.”

The university hopes the elementary student will one day become a UT student.

“Maybe we will see you on Rocky Top one day as a college student,” UT Alumni Senior Inspector Eric Haag said in a thank you card. “Keep working hard and always do your best.”

The boy’s mother said she was overwhelmed by the many “kind words of support” her son received.

“I am overwhelmed by the love I feel from this extended community and the pride I feel for my son and for being a VFL,” the mother, who only identified herself as VFL (Vol for life) in Florida, said in a statement posted to Facebook.

“Every comment, item sent and action taken on behalf of my son will never be forgotten and hopefully will serve as inspiration for him throughout his life,” the mother added. “We can’t wait to see if they print his shirt and will be first in line to order one so we can all support Big Orange on game day, even our Gators fan.”