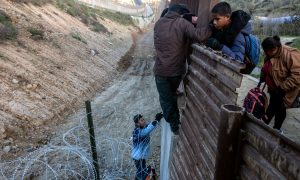 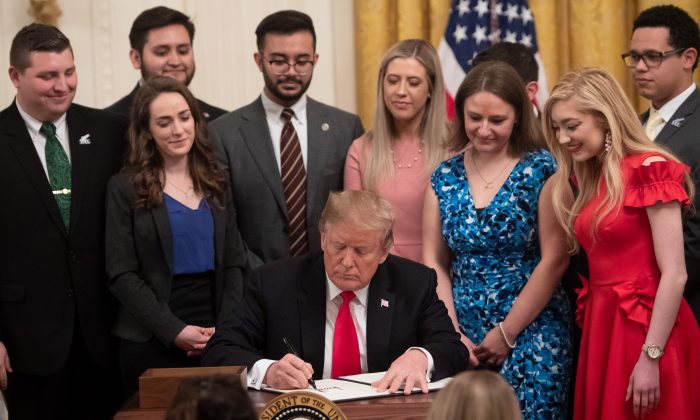 President Donald Trump signs an executive order to protect free speech on college campuses during a ceremony in the East Room of the White House in Washington, on March 21, 2019. (Saul Loeb/AFP/Getty Images)
US News

A federal judge ruled in favor of a Christian student who was told by Northwest Wisconsin Technical College (NWTC) that she couldn’t hand out religious-themed Valentine’s Day cards.

Polly Anna Olsen sued the school in federal court after campus security told her she violated school policy for handing out Valentine’s Day cards with Bible verses on them.

Olsen, studying to become paralegal, was stopped by campus security on Feb. 14, 2018, after passing out paper hearts with messages like “Jesus Loves You!”

Olsen’s lawyer, Wisconsin Institute for Law & Liberty president and general counsel Rick Esenberg, said the policy is unconstitutional, no matter if the ban on Olsen’s valentines was prompted by the religious content or not.

But Jeffrey Rafn, NWTC president told Fox News, “The ruling talks about common spaces and I think we’ll make it clear that students can be in any of the common spaces.”

Olsen won her case last Friday after U.S. District Court Judge William Griesbach ruled NWTC violated her First Amendment rights, saying the college “had no more right to prevent [Olsen] from handing out individual Valentines than it did to stop her from wishing each individual to have a ‘good morning a blessed day.'”

The decision read, “declaring that the defendants violated the plaintiff’s First Amendment rights by prohibiting her from handing out Valentines on February 14, 2018, and enjoining the defendants from applying NWTC’s ‘Freedom of Speech, Expression, and Public Assembly Policy’ so as to prohibit students from offering other students Valentines or similar notes.”

In March of this year, Olsen was invited by President Trump to share her story and take part in the signing of an executive order for free speech on college campuses.

President Trump’s executive action addresses a larger problem of students’ First Amendment rights being violated in the name of inclusivity.

The order declares that it’s the policy of the federal government to “encourage institutions to foster environments that promote open, intellectually engaging, and diverse debate, including through compliance with the First Amendment for public institutions and compliance with stated institutional policies regarding freedom of speech for private institutions[.]”

“But even as universities have received billions and billions of dollars from taxpayers, many have become increasingly hostile to free speech and to the First Amendment. You see it all the time. You turn on the news and you see things that are horrible,” Trump said.

Trump continued: “Under the guise of ‘speech codes’ and ‘safe spaces’ and ‘trigger warnings,’ these universities have tried to restrict free thought, impose total conformity, and shut down the voices of great young Americans like those here today,” the president said at the White House.

Just over half of the nation’s undergraduate college students support First Amendment free speech rights, according to a survey conducted by College Pulse.

The survey, which was underwritten by the Miami-based John S. and James L. Knight Foundation, reports that 53 percent of student respondents favor protecting free speech rights, while 46 percent say it is important to promote an inclusive and welcoming society.

Matthew Vadum contributed to this report