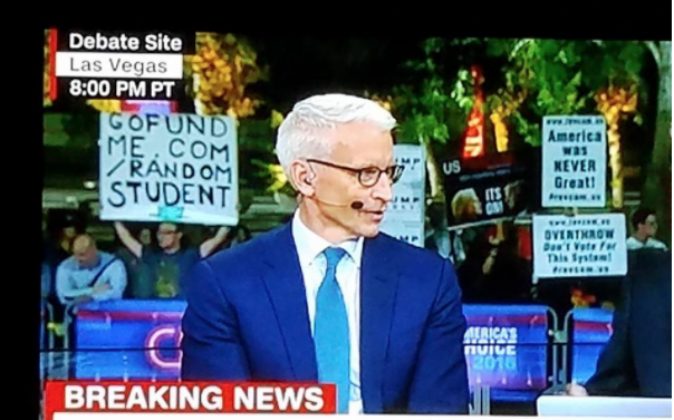 College Student Finds Way To Make Over $1,600 During Presidential Debate

One University of Nevada, Las Vegas student saw an unlikely opportunity to help offset his college costs during the third Presidential debate in Las Vegas.

When news spread that the university was hosting Republican nominee Donald Trump and Democratic nominee Hillary Clinton—along with a slew of media personnel—senior Alexander Lin hatched a plan.

A day before the debate was scheduled to take place on Oct. 19, Lin, who dreams of becoming a physician, established a GoFundMe account to generate donations that would go towards funding a “random UNLV student.”

“The funds will be split to further our education with me as well as Melissa Lin and allow us the priviledge [sic] towards bettering the health of the Las Vegas community,” he wrote.

He then made a sign that read “GoFundMe.com/Random Student” and took a position that would give him a lot of camera time—behind CNN’s Anderson Cooper.

Lin’s poster stood out among the other signs that read: “America was NEVER Great!” and “OVERTHROW Don’t Vote For This System!” as Cooper and other commentators engaged in post-debate conversations.

Since the launch of the crowdfunding page, Lin has raised over $1,600, a tenfold increase of his original goal of $100. Some donors commented that his appearance on CNN brought them to his page, hailing his creativity and ingenuity; others thanked Lin for providing a comic relief to the tense election.

Walt Dittrich wrote, “Saw you on CNN. Love the idea. Love the sign! Keep up the great work!”

“Cracked up when I saw your sign. Best of luck and I hope you get through school without any loans,” wrote Laura Fudge.

Trenika Fields wrote, “Brilliant idea! Thanks for bringing some humor to this election. Good luck on your journey to becoming physicians. We’re rooting for you all. The world is your oyster!”