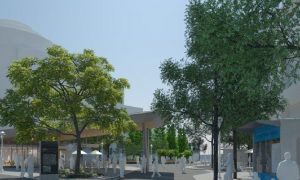 College Senior Falls to Her Death From Fordham University: Reports

A senior student at Fordham University in New York died after climbing the university’s famed bell tower to take a photo of New York City’s skyline.

Sydney Monfries, 22, climbed the tower at around 3 a.m. when she fell through an opening, dropping 40 feet to her death, reported the New York Post.

Her condition, as of April 14, was listed as critical. However, according to the Post, the president of Fordham confirmed her death.

Officials are investigating how the student gained access to the tower, which is normally locked. – WNBC pic.twitter.com/8p9ykvQshU

According to USA Today, the tower, located in the Bronx, is off-limits to students and is locked at night.

“Our hearts go out to Sydney’s parents, and her family and friends—theirs is an unimaginable loss, and we share their grief,” Rev. Joseph M. McShane said in a statement.

Regarding her death, he added, There are no words sufficient to describe the loss of someone so young and full of promise—and mere weeks from graduation. Fordham will confer a bachelor’s degree upon Sydney posthumously, which we will present to her parents at the appropriate time.”

Reports added that Monfries had hailed from Portland, Oregon, before attending the school.

“I know you join me in keeping Sydney, and her family and loved ones, in your thoughts and prayers,” Father McShane also said, reported the New York Times.  “I also urge you to be kind to one another, and to yourselves, in the days that follow.”

She was expected to graduate in May.

The Post reported that students who climbed the tower and took photos described it as a “rite of passage” at the school.

“I heard they were just getting a better view of the city,” a senior student told the news outlet. They were not identified.

The senior continued, “I think they were posting on Instagram when it happened.”

“There’s the three things you have to do at Fordham,” said Lili Huang, a 21-year-old, told the Times.

Sydney Monfries, 22, a senior at Fordham University, died after falling from a tower known to attract thrill-seeking students at the university’s Bronx campus. It was just a month before her graduation.

“The thrill of danger is definitely a huge allure to going up,” one student was quoted by the paper as saying. “I would say the other two reasons for going up are the amazing view of the entire campus from up there and the ability to brag about doing it.”

A Fordham University journalism student just weeks from graduation died after falling from the iconic campus clock tower, apparently while trying to take a picture.

“It’s like a tradition, apparently, for seniors to sneak into the tower and climb up. And they were like trying to get good views of the city,” student Antonia Greene told CBS New York.

However, another student said they aren’t sure. “I, personally, never heard about that. I’m not sure if it’s a tradition. If it is, it’s kind of stupid,” junior Linda Yenicag added to the CBS affiliate.

And despite the tower being off-limits to students, that hasn’t stopped them from climbing it.

“It’s like a senior thing to go on the most popular building on campus,” said Priscilla Morales, a psychology student, told the Times. “Recently people heard the door was open or found a passageway. They usually go late at night at around 1 or 2 a.m. to drink and see the view.”

The Times reported that she had posted a video from the top of the tower via Snapchat that didn’t show much. It had the caption, “Bell tower.”