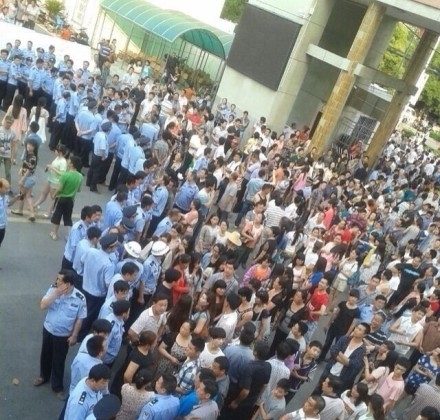 Police arrived to disperse a crowd of angry students and parents, who surrounded a high school in Zhongxiang City, Hubei Province after strict regulations were implemented to prevent cheating on the national college entrance exam, or "gaokao," administered on June 7 and 8. (Sina Weibo.com)
China

After proctors were brought in to combat cheating on the national college entrance exam at a high school in Hubei Province, several hundred students and their parents surrounded the school in protest, beating teachers, smashing the principal’s car, and ripping the school’s doors off their hinges. Police were later called to shut down the protests, and photos circulated online of officers standing off against an angry crowd.

Known as the “gaokao,” the exam is required for entrance into all undergraduate institutions in China and is extremely competitive. Cheating on the exam is rife, with an underground economy of electronic gadgets, earpieces, body doubles, and other methods meant to given an advantage.

At the Third High School’s Art and Physical Education Test Location, in Zhongxiang City, Hubei Province, 54 proctors from other provinces were brought in to administer the exam over June 7 and 8, the same dates it is taken nationwide. Teachers who live locally are known to be more susceptible to bribes, or lax in administering the rules.

The proctors confiscated cell phones, set up wireless jammers that blocked cell phone and other signals, and frisked students, according to students’ posts circulating online. The strict regulations angered many students and parents, who stormed the school after the exam ended.

At around 6:30 pm on June 8, one of the teachers sent a message through QQ, a Chinese messaging platform: “We’re the proctors, and now have been trapped by the students.” She said that on both June 7 and 8, a teacher had been attacked by a parent. “Students are out there smashing things, trying to break in. We’re hiding here in the proctor’s office waiting for help.”

One proctor who confiscated a student’s cell phone was beaten by the student’s parent after the exam, according to posts on Sina Weibo, China’s microblogging platform.

More students and parents began streaming back to the campus, besieging any teacher they saw. After the proctors were trapped in the school for about an hour, the police arrived to clear the crowd. Photos online show what may be hundreds of officers lined up in a human wall, standing off against the parents and students.

In some media reports, the parents and students were said to have been offended by what they said was the invasive nature of the searches they were subjected to. “The proctors from outside searched the students. Some male teachers groped the girls’ chests,” they claimed, according to Shenzhen Satellite. In the footage, a parent is seen angrily pointing and yelling at a teacher: “My child was very nervous!”

The broadcaster had also taken footage of students outside the school making telephone calls to purveyors of hardware for cheating on the exams, demanding their money back since the devices didn’t work.