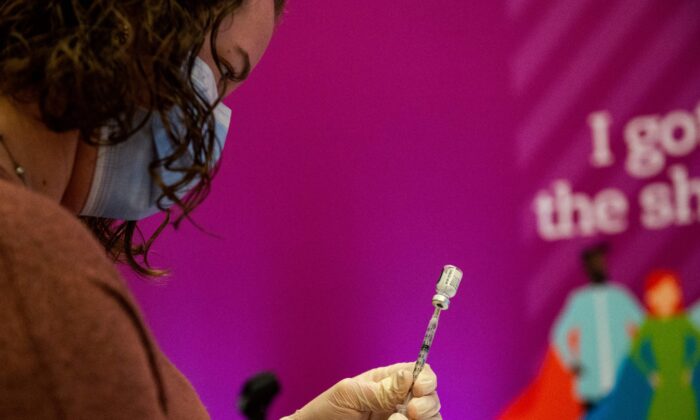 Forcing all young students to get COVID-19 vaccine boosters will cause more harm than benefit, according to a new risk-benefit analysis.

Some 22,000 to 30,000 adults aged 18 to 29 who have never been infected with COVID-19 must be vaccinated with a messenger RNA (mRNA) booster to prevent a single COVID-19 hospitalization, researchers estimated after crunching numbers from the Centers for Disease Control and Prevention and other sources. The Pfizer and Moderna shots are built on mRNA technology.

For one prevented hospitalization, the researchers estimated there would be 18 to 98 serious adverse events, including 1.7 to 3 cases of heart inflammation in young males.

The vast majority of cases of heart inflammation, or myocarditis, require hospital care.

The risk-benefit is even worse because many young people have recovered from COVID-19, giving them a protection widely known as natural immunity, the researchers said.

“And the really important thing is, this doesn’t factor in the actual real-world condition, which is that most of these young people have already had COVID,” Kevin Bardosh, an affiliate assistant professor at the University of Washington who studies public health and co-author of the study, told The Epoch Times. “This estimate is based on an uninfected population. So, actually, the risk-benefit assessment is drastically less favorable.”

The research was published online before peer review.

Dr. Andrew Bostom, a former professor of medicine at Brown University who was not involved with the study, told The Epoch Times that the research “raises grave questions about college vaccine mandates and really suggests that they should be abandoned altogether.”

As of May, over 1,000 U.S. colleges and universities required COVID-19 vaccines and some 300 required boosters, according to the new paper. Multiple schools have said they plan to require the newly authorized updated boosters, even though there is no human safety or efficacy data.

Bardosh and his co-authors, including Dr. Stefan Baral, an epidemiologist at the Johns Hopkins School of Public Health, and Dr. Tracy Høeg of the Florida Department of Health, used data from the from the Centers for Disease Control and Prevention (CDC), studies, and vaccine trials to figure out the risk-benefit estimates.

Serious adverse events are an event that leads to death, inpatient hospitalization or prolonging a hospitalization, persistent or significant disability, or other serious issues.

The group also used a rate of one case of post-booster myocarditis for every 7,000 mRNA boosters administered to males aged 18 to 29, based on a study that analyzed electronic health care records. CDC active surveillance data peg the number as lower, at one in 14,200 after a Moderna booster and one in 21,000 after a Pfizer booster.

To estimate the number of boosters needed to prevent a hospitalization, the researchers took the CDC estimate—9,000 Pfizer boosters for adults aged 18 to 29, or 12,000 Moderna boosters for the population—from before the Omicron virus variant emerged in late 2021 and updated it to account for Omicron’s reduced severity.

Limitations of the estimate include potentially inaccurate reporting from the trials and the CDC. The researchers called for large, controlled trials on booster doses, especially for younger populations, particularly in light of how universities have failed to report post-vaccination adverse events.

To be ethical, a public health policy must be expected to produce benefits that outweigh harms, the researchers said. For vaccine mandates, harms include side effects, restricting students’ liberty, wasting resources, and heightening distrust.

Given the data currently available on waning vaccine effectiveness, increasing natural immunity, and rates of heart disease after vaccination, colleges should immediately rescind mandates for boosters and the primary series of the vaccines, the researchers said.

They noted that schools in many European countries never implemented mandates, and that some nations have begun rolling back vaccines for youth.

Schools that imposed mandates should have performed risk-benefit analyses and updated them as new data emerged, Bardosh said.

“They have a responsibility to do what we did, basically. Because they haven’t done that it’s just unethical to mandate the product,” he said. “It’s negligent.”

The CDC, Pfizer, and Moderna did not respond to requests for comment.