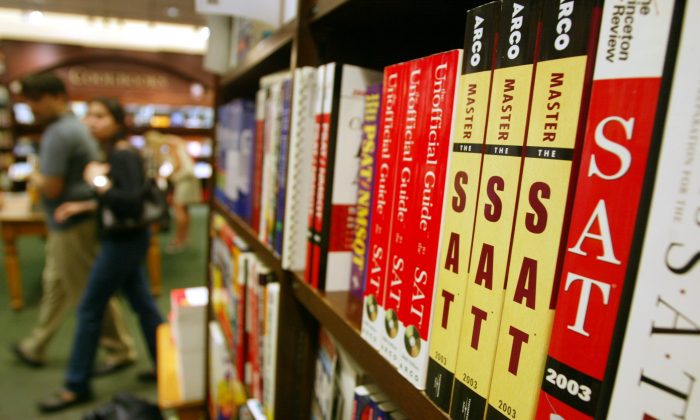 SAT test preparation books sit on a shelf at a Barnes and Noble store in New York City on June 27, 2002. (Mario Tama/Getty Images)
INSIDE CHINA

The College Board, which administers the Scholastic Assessment Test (SAT), has canceled the March 14 test for all registered students in China as well as those who plan to travel from China to testing locations in other countries, in the light of the coronavirus outbreak.

“We have been monitoring the spread of the coronavirus (COVID-19) and as the situation evolves, we are focused on the health and safety of students and educators,” a College Board spokesperson said in an email to Inside Higher Ed. “In accordance with the guidance issued by international health organizations, evolving travel restrictions, and concern for the virus spreading, we have cancelled the March SAT administration in China and the registrations of students who appear to be traveling from China to other countries to take the SAT.”

Registered students affected by the decision will receive a refund and can reschedule for a future test date, the spokesperson said.

Many Chinese students travel to nearby Asian countries to take the SAT. Popular destinations include Hong Kong, Thailand, and Singapore—all of which have reported cases of the coronavirus, now known as COVID-19. Hong Kong has 63 confirmed cases and two deaths. Singapore has at least 81 cases so far, and Thailand has 35 confirmed cases of coronavirus, which is believed of have originated in Wuhan, China.

Also cancelled were two English proficiency tests, the International English Language Testing System (IELTS) and the Test of English as a Foreign Language (TOEFL), potentially disrupting the plans of Chinese students who need those test scores to apply for colleges and universities in English-speaking countries.

Meanwhile, some students in China enrolled at American universities have found themselves unable to return to their U.S. schools for the spring semester because of recent travel restrictions. On Feb. 2, the Department of Health and Human Services announced that foreign nationals who have been in China within the past 14 days would be banned from entering the United States. Regular visa services at the U.S. embassy in Beijing and consulates in Chengdu, Guangzhou, Shanghai, and Shenyang have been suspended since Feb. 10.