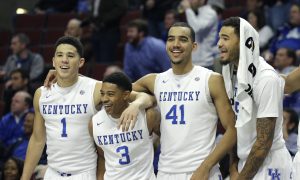 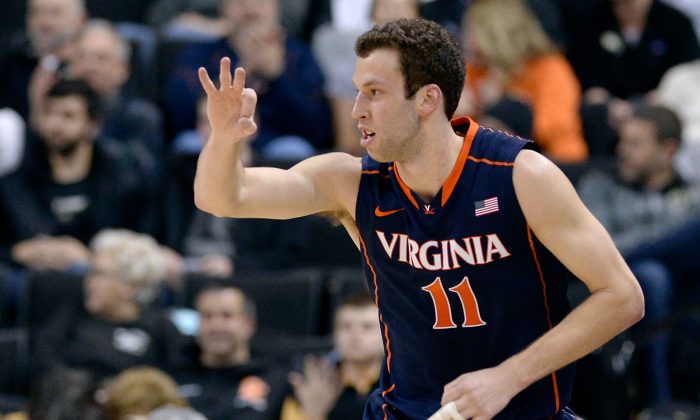 Evan Nolte and the Virginia Cavaliers have already wrapped up a share of the ACC title and likely a number-one seed in the NCAA tournament. (Grant Halverson/Getty Images)
College Sports

With just one week left in the regular season (for the major conferences, anyway), Kentucky and Virginia have clearly secured a pair of one-seeds while Gonzaga’s loss to BYU puts their top-seed prospects in doubt. Here are the 10 best teams as March Madness begins.

1. Kentucky (29–0): At one point in SEC play, Kentucky was playing down to the level of their competition, resulting in narrow victories against several overmatched opponents. But lately they’ve turned up their play several notches, resulting in five straight blowout wins with an average margin of victory of 24.4. John Calipari’s team has just two more regular season games before they enter the SEC tourney with a probable 31–0 record.

This week: at Georgia (Tuesday), versus Florida (Saturday). Previous: 1

2. Virginia (27–1): If the Cavaliers are going to win the ACC, they’ll have to earn it this week with road wins at two of the more difficult venues in the conference—at Syracuse’s Carrier Dome on Monday and at Louisville’s KFC Yum! Center on Saturday. Fortunately for Virginia, despite Duke’s recent run of nine straight wins, the Cavs only need one more victory to secure the outright crown.

This week: at Syracuse (Monday), at Louisville (Saturday). Previous: 2

3. Duke (26–3): There are a number of good freshmen out there, but Duke’s Jahlil Okafor is the most dominant. The 6-foot-11 center has scored in double figures every game this season and has nine double-doubles in ACC play. His play has been especially crucial since the team dismissed guard Rasheed Sulaimon in January, thus thinning Coach K’s rotation.

4. Arizona (26–3): Arizona, behind a tough defense Saturday night, went to Utah and held off their closest Pac-12 competitor 63–57 to clinch a share of the conference title. Sean Miller’s squad held the Utes to just 30.9 percent shooting in the win. Arizona’s own freshman phenom Stanley Johnson was just 3–19 shooting in the win and has hit just 32.7 percent of his shots over the last five games.

This week: versus California (Thursday), versus Stanford (Saturday). Previous: 6

5. Villanova (27–2): The Wildcats have now won 10 straight since getting thumped by Georgetown in mid-January and have wrapped up their second straight conference title and third overall in the Jay Wright era, which started in 2001. Leading scorer Darrun Hilliard II scored 24 points in Villanova’s 28-point pasting of Providence that clinched at least a share of the title.

This week: at Creighton (Tuesday), versus St. John’s (Saturday). Previous: 7

6. Wisconsin (25–3*): Bo Ryan’s Badgers, who have never missed the NCAA Tournament in his now 14 years at the school, may be in for their highest seed ever. Should they win both the Big Ten regular season and tournament titles, coupled with Gonzaga’s loss Saturday, they could be looking at a one-seed come Selection Sunday.

This week: at Minnesota (Thursday), at Ohio State (Sunday). Previous: 5

7. Gonzaga (29–2): After reeling off 22 straight wins since falling to Arizona in early December, Gonzaga was finally toppled at home by BYU to end the regular season, in a game where leading scorer Kyle Wiltjer hit just 2 of 11 shots. They still won the West Coast Conference by four games and enter the conference tourney as the top seed and heavy favorite.

8. Maryland (24–5): Slowly but surely the Terrapins are putting together quite a season, even knocking off Wisconsin last week. They’ll need a lot of help to win a piece of the Big Ten title, but it’s been an unexpectedly great season for Maryland after the team was unranked in the preseason polls. Mark Turgeon has turned in another great coaching effort.

This week: at Rutgers (Tuesday), at Nebraska (Sunday). Previous: NR

9. Wichita State (27–3): The Shockers toppled Northern Iowa on Saturday to take the Missouri Valley Conference crown for the second straight season and third in the last four. Head coach Gregg Marshall has now guided Wichita State to a 62–4 mark over the last two seasons and certainly deserves at least a mention when discussing the best current coaches in the game.

10. Kansas (23–6): Kansas went through quite a recruiting war with Kentucky three years ago to secure the services of in-state McDonald’s All-American recruit Perry Ellis. Ellis, now a junior, has officially become the team’s best player. The 6-foot-8 forward poured in 28 points and grabbed 13 rebounds in Kansas’ win over Texas, marking the third straight 20-plus point game for the humble star.

This week: versus West Virginia (Tuesday), at Oklahoma (Saturday). Previous: 9