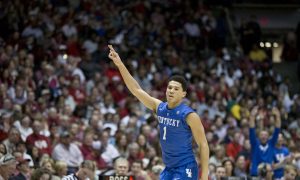 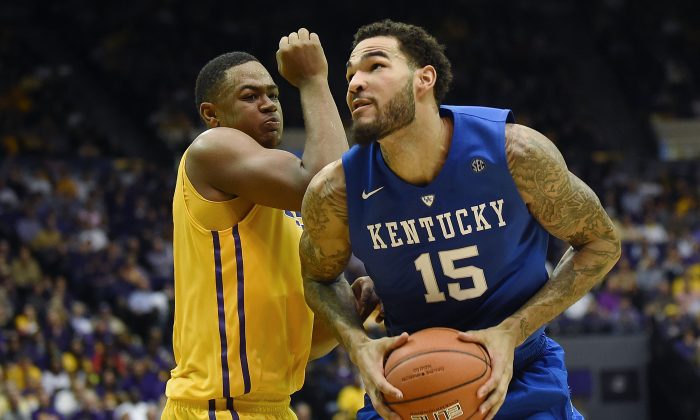 Willie Cauley-Stein #15 of the Kentucky Wildcats works against Jarell Martin #1 of the LSU Tigers during the second half of a game at the Pete Maravich Assembly Center on February 10, 2015 in Baton Rouge, Louisiana. (Stacy Revere/Getty Images)
College Sports

With the NFL season now firmly in our rear-view mirror and March Madness only a couple of weeks away, it’s finally time to focus on college basketball. Just in case you’ve missed the first few months, Kentucky is the greatest assembled team in years—if not decades—and everyone else is playing for second. Here are the best of those teams.

10. Utah (20–4): The Utes have mostly flown under the radar this season but they had a pretty decent non-conference schedule, with the likes of Kansas, Wichita State, and San Diego State highlighting it. Their signature win came in January though when they floored Arizona by 18 points.

9. Notre Dame (22–4): The Fighting Irish continue to be lead by senior guard Jerian Grant, who is the son of former Harvey Grant and nephew of Horace Grant—two former NBA-ers. The younger Grant scored a team-high 22 points in the win over Clemson and leads the team in scoring (17.0) and assists (6.2) per game.

8. Kansas (21–4): While Kansas is without the shot-blocking center they’ve had so many times in years past, the team wields a different weapon this season—the three-pointer. The Jayhawks have hit a big 12-leading 40.6 percent of their treys this season, which is their highest rate since 2010.

This week: at West Virginia (Monday), versus TCU (Saturday). Previous: 10

7. Villanova (23–2): Villanova, at 10–2 in the Big East, has a two-game lead over second-place Butler (who they beat on Valentine’s Day) with just six games to go. Senior guard Darrun Hillard II leads the team in scoring and is coming off a 31-point effort against the Bulldogs.

This week: versus Seton Hall (Monday), at Marquette (Saturday). Previous: 7

6. Arizona (22–3): Stanley Johnson scored 20 in the Wildcats win over Washington Friday, and the freshman continues to lead the team in scoring (14.5) as well as rebounding (6.7) per game as the Wildcats seek to win their third conference title under head coach Sean Miller.

This week: versus USC (Thursday), versus UCLA (Saturday). Previous: 6

5. Wisconsin (23–2): Wisconsin big man Frank Kaminsky put up 23 points and grabbed 11 rebounds in the Badgers win Sunday over Illinois. It was the second straight double-double for the senior forward and 10th of the season for the seven-footer, who’s scored at least 10 points in all but one game.

This week: at Penn State (Wednesday), versus Minnesota (Saturday). Previous: 5

4. Gonzaga (26–1): Nineteen wins in a row and counting for the Bulldogs. Gonzaga head coach Mark Few has had a number of good teams in his previous 15 seasons with the Bulldogs but never has he entered the conference tourney with just one loss—which is what this team is four games away from possibly doing.

This week: at Pacific (Thursday), at St. Mary’s (Saturday). Previous: 4

3. Duke (22–3): Duke freshman center Jahlil Okafor continues to come up big for the Blue Devils, scoring 23 points and grabbing 13 rebounds in the primetime win over Syracuse. His blocks per game rate (1.5) leave a little to be desired for the NBA, but he’s still the best in the college ranks at this point.

This week: versus North Carolina (Sunday), versus Clemson (Saturday). Previous: 3

2. Virginia (23–1): The Cavaliers are 2–0 without second-leading scorer Justin Anderson (fractured finger) , though the two victories were by a combined six points. Anderson leads the team in three-pointers made (46) while making nearly half (48.4 percent) of his attempts.

This week: versus Pittsburgh (Monday), versus Florida State (Sunday). Previous: 2

1. Kentucky (25–0): South Carolina became the 12th Kentucky opponent to fail to reach 50 points against the Wildcats vaunted defense Saturday, when John Calipari’s juggernaut routed them 77–43. Willie Cauley-Stein put up 14 points and seven rebounds in the win, and may be Kentucky’s best overall player.

This week: at Tennessee (Tuesday), versus Auburn (Saturday). Previous: 1