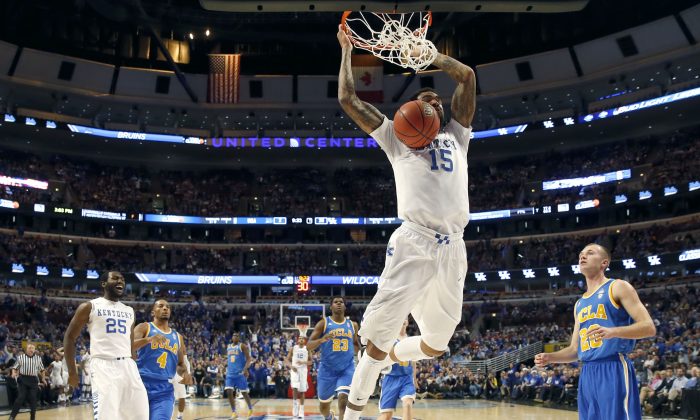 With Duke’s win at Virginia, Kentucky is officially the last undefeated team. Of course, at this point there’s a good chance the Wildcats will enter the Final Four with an unblemished record.

10. Kansas (18–3): The improving Jayhawks played their best game of the season Monday night in downing Iowa State 89–76. Sophomore guard Wayne Selden Jr. put up a season high 20 points in the win as KU finds itself in a familiar spot—atop the Big 12 standings.

9. Villanova (19–2): The Wildcats have bounced back from their blowout at Georgetown with a pair of double-digit wins over Creighton and Depaul. Now they have their chance at redemption this Saturday when they host the Hoyas.

This week: versus Marquette (Wednesday), versus Georgetown (Saturday). Previous: 9

8. Louisville (18–3*): The Cardinals staged an incredible comeback Saturday against North Carolina in coming back from an 18-point deficit and winning in overtime. Montrezl Harrell put up 22 points and 15 rebounds in the contest.

This week: at Virginia (Saturday). Previous: 8

7. Notre Dame (20–3): The Fighting Irish followed an impressive win over Duke with a tough road loss at Pittsburgh last week. Notre Dame lost to the Panthers despite shooting 53.1 percent from the floor but overall, are second in the country in field goal shooting (52.1 percent).

This week: versus Boston College (Wednesday), at Duke (Saturday). Previous: 6

6. Wisconsin (19–2*): Big Ten-leader Wisconsin has done it with tough defense and enough offense from Frank Kaminsky. The Badgers are seventh nationally in fewest points allowed at 55.5 while Kaminsky is tops on the team in both points (17.6) and rebounds (8.3) per game.

This week: versus Northwestern (Saturday). Previous: 5

5. Duke (18–3): It was gut-check time Saturday for the Blue Devils, coming off a loss to Notre Dame followed by the dismissal of junior guard Rasheed Sulaimon, and Duke responded by handing mighty Virginia their first loss of the season. Freshman center Jahlil Okafor continues to impress, averaging team-highs of 18.3 points and 9.4 rebounds per game.

4. Arizona (20–2): The Wildcats held Oregon State to just 34 points in their latest win—a 23-point blowout—as Arizona is holding on to a one-game lead over Utah in the Pac-12. Senior guard T.J. McConnell is a defensive menace, who also averages a team-high 5.8 assists per game.

3. Gonzaga (22–1): The Bulldogs have won 15 straight games since Arizona tripped them up in overtime back in early December and they sit atop the West Coast Conference with a 10–0 record. Sure, they aren’t playing any top teams in league play, but Gonzaga has won nine of their ten conference games by a dozen points or more.

2. Virginia (20–1): Yes, the Cavaliers just lost Saturday to Duke, but did anyone see them stifle the Tar Heels (in North Carolina) Monday night? They completely took the air out of the building with a 22–6 run, midway through the second half to seal the win.

This week: versus Louisville (Saturday). Previous: 2

1. Kentucky (21–0*): The Wildcats are still tops in the nation in points allowed at 50.7 per game as their undefeated run continues. In addition, there’s not a single game left on their schedule (home or away) that they won’t be favored to beat.

This week: at Florida (Saturday). Previous: 1