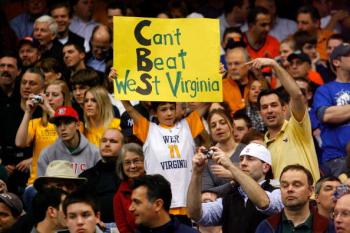 A fan of the WV Mountaineers holds up a sign in reference to the game being broadcast on CBS network against the Kentucky Wildcats. (Chris Chambers/Getty Images)
NBA

Every spring, the NCAA men’s division holds its basketball championship tournament—a sudden elimination bracket that includes 65 college basketball teams. The games are mostly held in March of each year and are known in media circles as March Madness. These national semifinals and finals are nicknamed the “Sweet 16,” the “Elite Eight,” and the “Final Four.”

College sports broadcasting in general is highly competitive, and rights, fees, and broadcasting costs, including production expenses, are often not covered by the revenues earned, which come from advertisements broadcasted during the given sports events, according to the CBS annual report.

Advertising is affected by the popularity of the events, as represented by an audience rating, and by economic conditions. Revenues may take a drastic dip during economic downturns as sports fans stay home.

“Any reduction in advertising expenditures could have an adverse effect on the Company’s revenues and results of operations,” CBS said in its 2009 annual report.

CBS reported that advertising revenue decreased by 12 percent in 2009 from 2008, down to $8.2 billion from $9.24 billion, although it did not go into detail as to what programs lost advertisement funds.

As such, landing the rights for the NCAA college basketball championship game can be a guaranteed revenue stream for CBS, given the popularity of the event.

“It offers CBS a captive audience [in a] very hard to reach demographic—the 18- to 34-year-old males who congregate around no other property like they do around sports. When you have one of those tent poles … this is important to a network,” said Scott Rosner, associate director at Wharton Sports Business Initiative, in a recent report by Knowledge@Wharton (KW).

“With 65 teams in the tournament since 2001, CBS is now in the midst of a 13-year, $6 billion contract, heavily back loaded so that in the next three years, it will be paying $2.13 billion for the rights,” according to KW.

Basketball Games Highly Lucrative
NCAA basketball tournaments have become the darling of televised sporting events and the payback to the schools is considerable, according to KW.

The NCAA tournaments are not just a money-making machine for the respective school, but bring many other benefits to the school that are equally important, such as prestige and a significant increase in college applications.

“George Mason University’s stunning Final Four run in 2006 made the team an instant fan favorite and the university a household name. Fortunately for Mason, which was highly regarded as the region’s most up-and-coming university, good things were already happening. But new data shows the Final Four appearance put its progress on fast forward,” GMU said in a 2008 press statement.

Page views on the sports division’s website soared by 503 percent and unique viewers by 702 percent. Almost everything that had to do with GMU’s sports division rose drastically. More season tickets for games were sold and home games were packed with fans wanting to see the game.

Most importantly, GMU earned roughly $678 million in totality, factoring in free local, regional, and national print and electronic media coverage, due to its game exposure. That’s serious money for any university.

“We believed we had things in a good trajectory here, but the NCAA run certainly accelerated it,” KW quoted Baker in its report.

Publicity and promotional activities could never have achieved the effect of being in the “Final Four.” Baker said, “What we found [to be] even better was that every time our coach, Jim Larranaga, was interviewed, he [would] say good things about the university in general. There is no way we, as a university, could have bought that publicity.”

The highest subsidy of $22 million was received by Rutgers University’s sports teams, followed closely with a $19 million subsidy received by the University of Nevada at Las Vegas sports program.