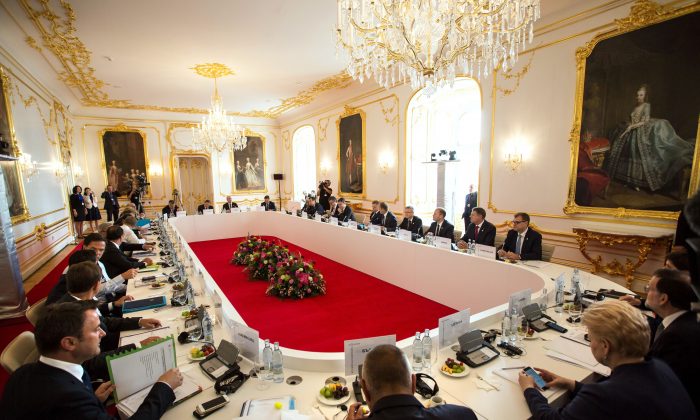 EU Prime Ministers and Presidents attend a round table during the European Union Summit of 27 Heads of State or Government in Bratislava on Sept. 16, 2016. (Vladimir Simicek/AFP/Getty Images)
Europe

Collective Defense Is Suddenly a Hot Topic at EU Summit

BRATISLAVA, Slovakia—Talk of joint efforts to defend Europe is on the lips of EU leaders after decades of leaving collective security mostly to the United States and NATO.

Nobody is suggesting a joint European army, with thousands of tanks and combat planes displaying the EU’s star-studded logo. But at a summit in the Slovak capital on Friday, heads of 27 countries named common defense as one of the goals needed to bring the bloc forward as it looks to shake off a sense of inertia.

“There is no continent, there is no union, if there is no defense of what we are when it comes to values and interests,” French President Francois Hollande declared.

“It’s about showing through deeds that we can become better,” she said, talking about “cooperation in the field of defense” in the same breath as the fight against terror, economic growth and job creation.

It’s not a new idea. The EU’s Lisbon Treaty, which took effect in 2009, foresaw a mechanism for permanent defense cooperation inside the bloc. Squabbles among member states, however, have kept the topic in the background at most previous meetings of European leaders.

But new perceived threats, both elemental and existential, have emerged since the treaty became law. Eastern European nations fear a bellicose Russia on their borders. Warfare overwhelmingly includes cyberattacks, violent Islamic extremism and other modern challenges.

Add the EU’s desire to demonstrate decisive actions, Britain’s pending exit from the bloc and continued U.S. pressure on Europe to become more independent militarily, and the idea of a common defense strategy becomes more compelling than ever.

Most EU members also are in the North Atlantic Treaty Organization. But the United States carries by far the greatest burden in that defense organization. And although EU and NATO interests generally overlap, the Americans would welcome more effort from Europe to protect its own house.

U.S. President Barack Obama this year called out the EU for being “complacent about its own defense,” adding: “We need a strong Europe to bear its share of the burden.”

Europe may be getting the message, even amid protracted squabbling on other issues.

European Commission President Jean-Claude Juncker said this week that the bloc must do more in the defense field, starting with creation of an EU military headquarters and working toward a common military force.

Juncker insisted the bloc’s economic and cultural influence isn’t enough to safeguard its place in an uncertain world, a theme picked up Friday by Belgian Prime Minister Charles Michel.

Michel described European diplomatic efforts as “feeble… if we don’t have military capacities.”

The Bratislava meeting comes as the EU already is mapping out a global strategy that includes advancing joint defense capabilities.

Federica Mogherini, the EU’s chief diplomat, told EU foreign ministers this month that plans have moved from general discussions to having “first operational results” by spring, describing them as the “real stuff.”

“The European army is not something that is going to happen any time soon,” she said. “But what can happen very soon is member states are committed to advance in the field of European defense with very concrete measures.”

The EU already has 18 battle groups consisting of 1,500 troops each, forming the basis of an armed force, But even if those forces grow, leaders of nations most at potential risk from Russia emphasize that the EU initiative is unlikely to match the military deterrence potential packed by NATO.

“We cannot duplicate NATO, we cannot replace NATO,” Lithuanian President Dalia Grybauskaite said. “We are talking about better use of military assets.”