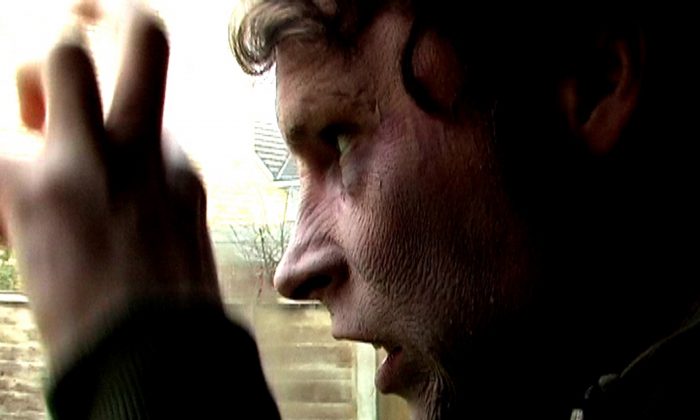 Another day, another zombie movie. Colin is altogether a different strain though. It is an ambitious, near-zero budget, very British, apocalyptic zombie horror, told in its entirety from the walking dead’s perspective.

Colin (Robert Peep Show Webb lookalike Alastair Kirton, in an impressive physical performance) is bitten by a zombie and dies, only to rise again as an undead thing. So begins a ramshackle ramble through the wild streets of London in search of… something, as civilisation crumbles all around him.

It almost seems unfair (and I do feel a little guilty) criticising a film that was shot on a camcorder for only £45 (allegedly). In its own way it is a staggering achievement. What it isn’t, however, is great cinema.

Now, you can excuse the over-abundance of shaky-cam, poor lighting conditions, poor audio quality, ropey acting and choppy editing. What you can’t excuse are core issues with story (I’m sorry, fast-moving zombies I can abide but I just can’t get on board with human emotions and memories ascribed to a braindead thing. The operative word being braindead), MASSIVE gaps in logic, set-pieces that fail spectacularly (the home siege/the pub basement/a contrived family reunion) and the fact it long outstays its welcome. As a short film that ends at the family home or perhaps as a series of webisodes, this might have passed muster. As a 97-minute feature film? No way.

Ultimately – and realistically – Colin is probably about as good as any cheap-as-chips student-type production has any right to be. It’s worthy of a look-see for interest’s sake. Had this been a final year submission, you’d probably be looking at a 1:1. As an entertaining and engaging genre pic, just the two stars.

The “Romero-esque” hype is a bit beyond as well, unless of course they mean Diary of the Dead, rather than any of his original genre-defining Z-trilogy.