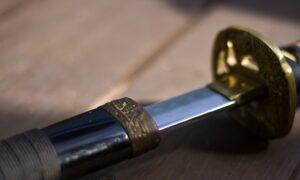 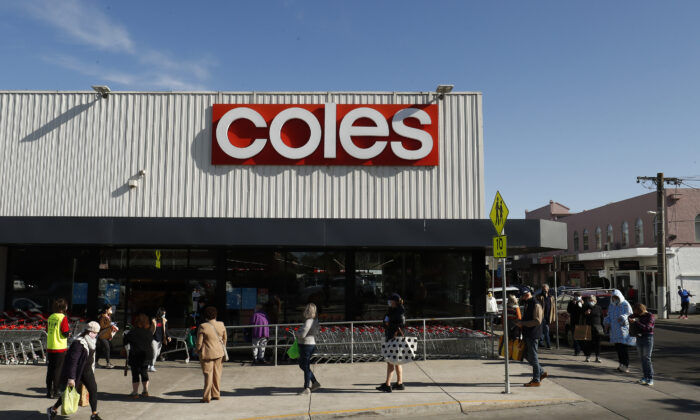 People line up outside a Coles supermarket in Malvern in Melbourne, Australia on Aug 2, 2020. (Darrian Traynor/Getty Images)
Australia

Coles says industrial action at its largest NSW warehouse won’t affect grocery supplies at its stores in the lead-up to Christmas.

“To ensure that our stores can continue to offer a full range of products for our customers through the Christmas and New Year period, we have made alternative arrangements for products ordinarily distributed from the Smeaton Grange distribution centre,” a spokesperson said on Nov. 19.

Coles had proposed a new enterprise agreement for its Smeaton Grange distribution centre in Sydney, which would deliver a 3.5 percent increase to annual wages and monetary allowances, it said.

Despite relatively flat wage growth across all sectors, worker representatives were demanding a 5.5 percent annual wage increase, it said.

Coles had also offered enhanced redundancy provisions from a maximum of 52 weeks’ pay to a maximum of 80 weeks’ pay for involuntary redundancies resulting from the expected closure of the site in 2023.

It said workers at Smeaton Grange had rejected the offer and demanded redundancy payments up to the equivalent of two years’ pay.

The United Workers Union said members had voted to have rolling 24-hour stoppages from Thursday over jobs and benefits.

More than 350 workers at the distribution centre in Smeaton Grange are battling to keep their jobs in the face of automation, the union said in a statement.

Workers want improved redundancy entitlements, the right to transfer to the new Coles warehouse, job security in the form of a permanent to casual ratio and an increased wage offer.

“Workers at Coles Smeaton Grange are taking action today because they’re fighting for the right to have a job,” the UWU Matt Toner said.

Coles was building a new automated warehouse but had refused to give workers at Smeaton Grange an opportunity to be redeployed to the new facility, he said.

“Workers want the right to keep their job at the new facility and if not want to be respected for the many years of service they have given to ensure Coles’ profits, even throughout this global pandemic,” Toner said.

Workers will be voting on whether to continue the 24-hour stoppages over the coming days.