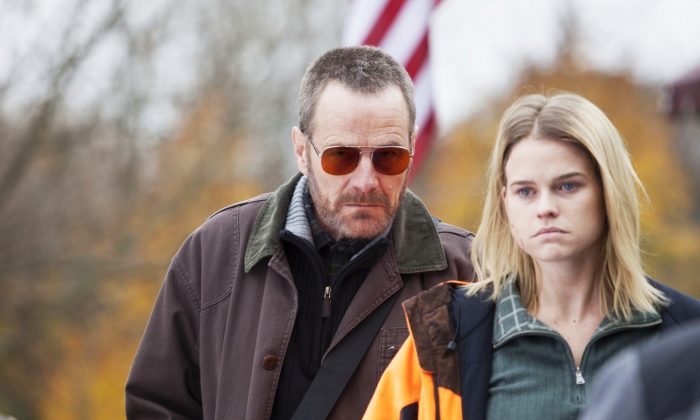 Cold Comes the Night: A Gritty Noir for Bryan Cranston

The Russian mob does not have much in terms of pension and disability plans, so an aging courier slowly losing his eyesight does not have many options. He just carries on, relying on trusted accomplices.

Unfortunately, when a shipment of cash goes awry, he will force a single mother to help him retrieve it in Tze Chun’s “Cold Comes the Night,” which opens this Friday in New York.

Topo can count on his partner to cover for him, but he has little confidence in the younger man’s judgment. His lack of faith is vindicated when they stop for a few hours of shut-eye at Chloe’s no-tell motel in upstate New York.

When a lurid misadventure leads to the death of Topo’s associate and a local girl, the more discreet older thug forces Chloe to serve as his eyes. Initially, Chloe does so to protect her young daughter, Sophia.

However, as she grows somewhat used to the grizzled Topo, she tries to forge a temporary alliance. After all, he seems to be a better bet than Billy, the corrupt married cop she has reluctantly been carrying on with, who also becomes their leading suspect.

Although “Cold” starts out as a mother-and-child-in-jeopardy thriller (sort of the reverse of “Wait Until Dark”), it soon develops its own distinctive identity. Wisely, it largely removes Sophia from the line of fire, focusing instead on Chloe’s uneasy give-and-take with Topo.

There are no cheap rehabilitations in “Cold” either. Topo essentially remains who he always was, even though he develops a subtle regard for Chloe.

Admittedly, he never breaks a sweat, but it is still fun to watch Bryan Cranston do his thing as Topo. He seethes like a champion and nicely projects an air of world-weary existential resignation.

As Chloe, Alice Eve holds her own against Cranston’s Topo surprisingly well. At least, she is not a shrinking-violet Lifetime movie heroine. Young Ursula Parker is also relatively down-to-earth and endurable as Sophia. In contrast, as greasy Billy, Logan Marshall-Green annoyingly acts like he is channeling Bill Paxton.

Perhaps the film’s biggest surprise is that such a gritty noir comes from director and co-writer Tze Chun, as the follow-up to his emotionally wrenching coming-of-age story, “Children of Invention.”

It turns out, he has a good handle on the double-crossing machinations of the “Simple Plan”-style thriller. “Cold” moves along at a healthy clip and delivers plenty of Cranston. (This is no glorified cameo, but a legitimate featured role.) It definitely comes from a B-movie place, but the elements come together rather effectively.