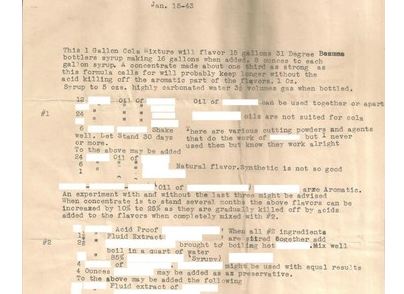 Coke formula claim: Cliff Kluge of Ringgold, Georgia, may have discovered the secret formula for Coca-Cola.

“We go around looking for treasure,” Kluge, an prolific antiques collector, told WXIA-TV. “And apparently we may have found some.”

Kluge and his wife Arlene recently purchased a box of letters and papers at an estate sale.

One of those papers, says Kluge, is a recipe for Coca-Cola from 1943.

“You don’t stumble on things like this very often,” he said. “It’s a letter, and a formula, and the processes to make it.”

Officials from Coca-Cola told them that they’d call him back in 7 to 10 business days, but they haven’t followed up with him yet.

Coca-Cola sent along this statement to WXIA:

“Through the years, many have tried to crack the secret formula, but no one has been able to reproduce the ‘real thing.’  The real formula is safely tucked away in a vault at the World of Coca-Cola in Atlanta.”

Kluge has put the recipe on eBay, with a starting bid of $5 million.