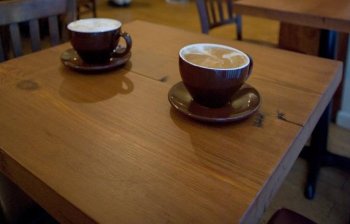 Jeremy Lyman (L) and Paul Schlader (R) in the second-floor library area of their coffee shop in Manhattan. (Aloysio Santos/The Epoch Times)
US

A Coffee Shop Oasis in the Big City

NEW YORK—Grabbing a cup of coffee in any of America’s cities is a common occurrence. But for those who savor the experience of going to the coffee shop and spending time relaxing in a homey environment, things aren’t what they used to be.

For example, Midtown Manhattan is an area full of busy, working professionals. But there is an appalling shortage of welcoming environments to have a cup of coffee and relax undisturbed.

That’s part of what makes Birch Coffee, co-founded by owners Jeremy Lyman and Paul Schlader, such a rare find—even in a metropolis like New York City. Even harder to find than a good cup of coffee is a quiet corner—and Birch Coffee has both. Its charm stems in part from the owners’ personal love of their business.

“A few years ago, I was contemplating what I wanted to do, and I really enjoyed hanging out in coffee shops,” says Lyman. So he combined his love of caffeine and kicking back with his professional experience. “I’ve worked in restaurants and just have a passion for it.”

Schlader joined forces with Lyman and they opened their coffee shop in October. It is full of charming details in wood and brick. The semi-mismatched furniture is either recycled pieces or reconfigured scraps from doors and tables. Exposed brick walls line one wall, in both the upstairs and downstairs.

Every inch of Birch was carefully crafted by Schlader and Lyman, who even recorded time-lapse video of the refurbishing process before they opened.

While Birch’s downstairs area is airy and open, upstairs is its own world and feels a bit like walking into your friend’s living room. Nestled above the main floor is what Schlader and Lyman call the area “the library,” it includes a balcony-like lookout with a high-top table with direct line of sight to the shop’s front door. Two bookshelves of used books line one wall, and the room extends back toward a huge window that overlooks the next door hotel’s lobby.

“The one thing that people are always looking to get rid of is books,” says Lyman. “I’m a big fan of taking books and leaving books.” The library also includes chess sets, and the coffee shop has free wireless Internet.

“[We want] people to have that community feel,” says Schlader. “To sit down and be able to hang out and not be rushed back out onto the street.” And even though Lyman and Schlader haven’t put up any quiet signs, the library is one of the most hushed corners of Manhattan.

The low lighting and overstuffed couches and chairs are mixed with mismatched wooden chairs.

“The library was a really special find for us,” says Schlader, who adds that it was originally painted completely white. The space was offered by the Gershwin Hotel, which Birch is adjacent to, as part of the lease. The men spent several hours every day for two weeks stripping paint off of the biggest wall in the room.

“There’s a lot of pride in this place,” says Schlader, surveying the area and looking down at the main coffee shop floor below.

In addition to the cozy environment, Birch also features a full menu of food made with the choicest ingredients. Bagels and croissants are not made in-house, but everything else is made.

The real stars of Birch are the espresso drinks. Upon ordering a latte or cappuccino, customers will notice that their drink is not a cranked-out, mass-made product.

“Espresso, if it’s tamped and done correctly, is going to taste like chocolate,” says Schlader. “It’s very, very smooth, creamy, rich, and has a very nice flavor to it. If you ever had an espresso that tastes bitter, biting, or sour—the person who pulled your espresso did a poor job.”

If it sounds a bit serious for a cup of coffee, you haven’t heard the half of it. Birch’s iced coffee is cold brewed for 12-14 hours, rather than brewed hot and then chilled.

The finished product belies the long road of hard work that came before Birch opened its doors last month.

“There was definitely a part of me that was convinced that it was never going to happen,” says Lyman. “But I never stopped moving forward.” The end result seems to have made their struggle worthwhile.

“I’ve never been happier,” says Lyman. “I feel like every day when I get home, ‘Alright, I actually did something today.'”

Schlader concurs, and adds that even though they’ve put themselves on the line for their business venture, it’s worth it.

“I think you can tell when you come in here that there’s an energy that is definitely Jeremy and I,” says Schlader.