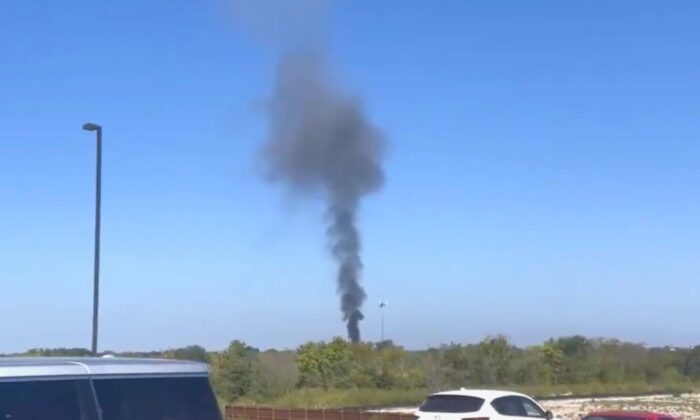 Smoke rises after a military aircraft crashes into a residential area in Lake Worth, Texas, on Sept. 19, 2021. (Courtesy of J Shaw/Screenshot via NTD)
US News

A newly released video from the U.S. military revealed that a large bird caused a military jet to crash into a residential area in a suburb of Fort Worth, Texas, last September.

The video shows the moment a bird flew into the jet’s single-engine during a routine training exercise on Sept. 19, 2021, as it was on its way to land at Naval Air Station Joint Reserve Base Fort Worth.

Moments after the impact, alarms are heard sounding in the cockpit, and the instructor pilot reacted that he believed they were not going to make it to the runway. The instructor was with a student naval aviator, whose condition was described as critical/life-threatening at the time of the crash.

Both pilots safely ejected before the aircraft crash-landed in the backyard of a residence, severely damaging three homes and injuring several people.

However, the student got electrocuted after the parachute of the aviator struck power lines, according to a statement from the Chief of Naval Air Training (CNATRA).

Police said in September 2021 that it was “a miracle” there weren’t any casualties, though noting that the student pilot was “badly burnt,” but was “conscious, alert, and breathing.”

“I was in my car on [State Highway] 199 right in front of the donut shop when the pilot landed on the powerlines,” Cara Camp told KXAS-5. “While driving, I heard a loud explosion and debris was hitting the car.”

The instructor pilot was located with non-life threatening injuries in a wooded area a short distance away from the crash site.

The identities of the pilots haven’t been released publically.

The fiery crash caused power outages in the area and the wreckage’s debris was found in three of the homes from which residents were evacuated by Red Cross members.

“In total, three homes were damaged by the crash and many more have been affected by smoke and debris,” police said in September 2021, adding that three community members sustained minor injuries and at least one was transported to a local hospital.

Another woman posted video footage from the scene, saying that she couldn’t believe “we just saw a plane crash” in Lake Worth, adding to “please pray” for the victims.

The neighborhood is located about a mile north of Naval Air Station Joint Reserve Base Fort Worth. The jet originated from Corpus Christi, according to CNATRA, which is located about 350 miles south of Lake Worth.