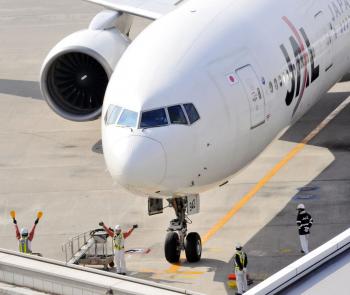 Sophia Bronwen
View profile
Follow
biggersmaller
Print
Bright lights assumed to be lasers being shone into the cockpit of airplanes is a growing problem for pilots in Canada and the United States.

In Canada in 2010, flight crews complained of bright lights being shone into aircraft cockpits—the majority of which were commercial—335 times, including 182 confirmed incidents. Complaints were also filed by some private and government planes.

The United States has seen a similarly massive jump in cases up from 1,527 instances in 2009, to 2,836 cases of people pointing lasers at planes or helicopters in 2010, according to a Federal Aviation Administration (FAA) release on Jan. 19.

The FAA attributed the increase to several factors including the ease of buying inexpensive lasers on the Internet, higher power levels, increased reporting, and the introduction of green lasers, which can be seen more readily than traditional red ones.

In Canada “Aiming a directed bright light source into the cockpit of an aircraft is a federal offence under the Aeronautics Act, ” said Transport Canada spokeswoman Maryse Durette, according to QMI. And some cities and states have laws making it illegal to shine lasers at aircraft and, in many cases, people can face federal charges.

Although only two people in Canada have ever been convicted of the offense, plus one trial pending, complaints and confirmed cases are rising rapidly, QMI says.

In Florida, on New Year’s Day this year, two teenagers were arrested for rupturing blood vessels in the eyes of two helicopter pilots working for the Collier County sheriff’s office, reported Naples Daily News. They were charged with “pointing a laser light at a vehicle or aircraft operator causing injury,” which is a felony carrying up to a five-year prison term.

In Orlando, a 43-year-old man pleaded guilty on Jan. 19 to hitting a sheriff’s office helicopter last April temporarily blinding the pilot. He faces up to 20 years in a federal prison for interfering with the operation of an aircraft, reports the Orlando Sentinel. He faces sentencing on April 20.

Not surprisingly, most of the flashes occurred after dark, usually while the aircraft was either taking off or landing.

Ironically, Durette added, “The thing we noticed, though, is the more we talk about it the more copycats there are. It’s a very serious offense.”

Convictions are rare due to the difficulties coordinating reports from a pilot in the air and an individual on the ground, QMI reports.

Depending on the intensity of the laser, the effect on pilots can be similar to that caused by a close-up camera flash or severe enough to cause permanent retina damage.

Because of the potential hazard to aircrafts, the Australian province of New South Wales identifies a laser pointer as a Schedule 1 Prohibited Weapon.

In the United States, lasers of any strength are legal for sale as long as the device is not advertised as being for the purpose of pointing or beam-display.