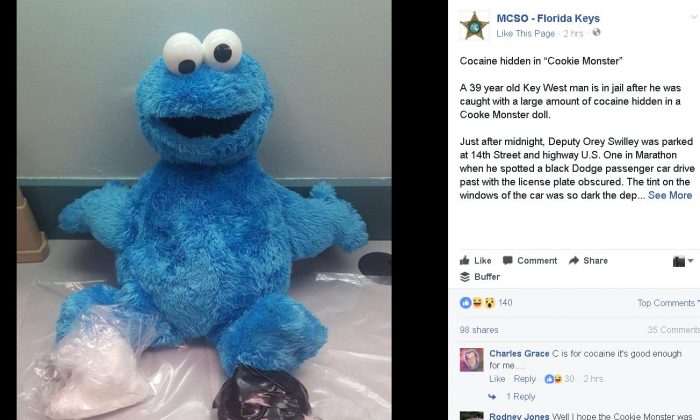 A Florida man was jailed after he was caught with a significant amount of cocaine hidden inside a Cookie Monster doll, the Monroe County Sheriff’s Office says.

Camus McNair, 39, of Key West, was spotted by a sheriff’s deputy after midnight on Wednesday on Highway One near Marathon, Fla.

When the deputy had him roll down his window, the aroma of marijuana was noted.

“A search of the vehicle turned up a backpack. Inside the backpack was a blue ‘Cookie Monster’ doll,” the sheriff’s office said in a statement.

The doll “seemed to weigh more than it should have,” the department said. “He took a closer look and found a slit cut in the doll. Inside the doll were two packages containing what turned out to be a total of 314 grams of cocaine.”

WPLG reported that he’s now being held without bond on felony charges.

The office added that paperwork found inside the backpack showed that it likely didn’t belong to him, WPLG reported.

It’s not the first time that cocaine was found inside a doll.

In 2015, a New York City drug dealer was found to have hidden cocaine inside a doll from the movie “Minions.”

“Kilos of cocaine were disguised as children’s birthday gifts, and shipped alongside innocent looking Olaf dolls and other toys, in a failed attempt to conceal the sinister contents,” said an official at the time.