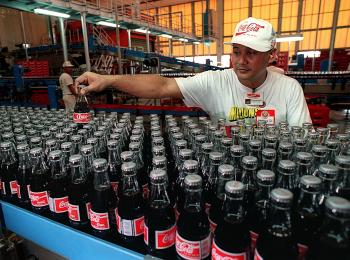 Coca-Cola on Wednesday said they are expanding their operations in the Philippines. Shown above, A worker inspects bottles of Coca-Cola in Coca-Cola's plant in Bacolod, Philippines. (Justin Sullivan/Getty Images)
Business & Markets

Vicky Lin
View profile
Follow
biggersmaller
Print
Coca-Cola Co. will be investing an additional $1 billion in the Philippines over the next five years to expand their presence in Asia’s developing markets, said the company on Tuesday.

"Our new commitment to invest US$1 billion in our business over five years will strengthen production, distribution and help development of new products to refresh Filipino consumers," Glenn Jordan, Coca-Cola Pacific Group President, said in a statement.

The announcement was made following a meeting with Benigno Aquino, Jr., president of the Philippines in New York.

The company is building a bottling facility scheduled to open next year in Misamis Oriental, Philippines.

"This investment is a proof point of our strong commitment to the Philippines, our confidence in the prospects of the Filipino economy and the continued growth of a broader and more affluent middle class in the Philippines,” said Mr. Jordan.

The company also plans to expand its Minute Maid brand.