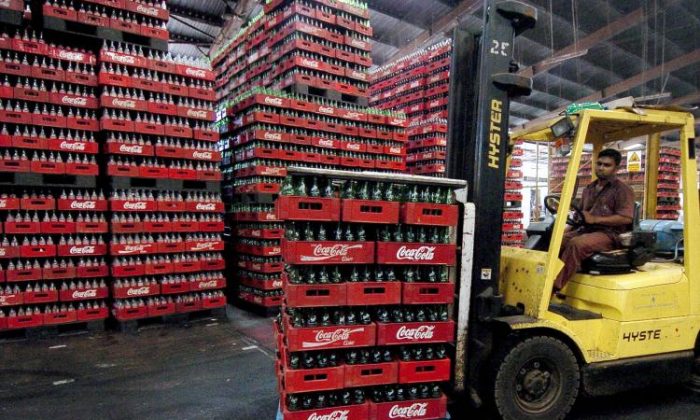 A Coca-Cola factory in Biyagama, Sri Lanka. A Chinese branch of Coca-Cola is facing claims that over 70,000 drinks contaminated by chlorine were released to the market. (Lakruwan Wanniarachchi/AFP/Getty Images)
China

Coca-Cola Co. recently announced good first quarter 2009 results. Despite the economic downturn, the company increased its sales by 2 percent in the United States and by 3 percent worldwide.

A Chinese branch of Coca-Cola is facing claims that over 70,000 drinks contaminated by chlorine were released to the market, while the government bureau responsible for quality inspection is accused of attempting to alter its report to cover up an inspection mistake.

On April 17, Coca-Cola Shanxi employees broke the news to the media that during a pipe renovation, chlorine-based disinfectants contaminated the water used for beverage production. Nine batches comprising over 121,058 cases of soda were involved, worth 5 million yuan (US$793,185). Over 76,391 cases of potentially contaminated beverages are now apparently being sold in the market.

According to China National Radio, an official media outlet, on the morning of April 18 the Shanxi Province Quality and Technical Supervision Bureau released the test results of nine batches of drinks to the media. The document, presented by Ms. Liang Baoai of the Food Quality and Safety Supervision and Inspection Institute of Shanxi Province, showed that the amount of chlorine contained in Fanta (orange-flavored soda) drinks was 0.04mg/L, much higher than the international standard of 0.005mg/L. High doses of chlorine can lead to a higher risk of cancer.

Coca-Cola Shanxi’s internal e-mail leaked to Chinese media by an insider shows that on the evening of Feb. 8, chlorine was found in processed water. If every inspector had performed a taste test for every batch of products as is required, the problem should have been detected in advance, reports indicated.

According to media reports, an employee revealed that on Feb. 3, the night shift maintenance worker mistakenly mixed chlorine disinfectants into processed water for production while a remodeling of the pipes was going on.

On Feb. 4, when the day shift employees of the Production Department were drinking the water, they noticed an especially heavy chlorine taste, but reportedly did not think much about it.

Production using chlorine-contaminated water continued until the evening of the Feb. 8, when a large amount of chlorine was found in the water. Production was shut down immediately.

The nine batches were isolated by the Department of Warehousing after taste-testers reported problems with some of the beverages. However, not long after, the batches were unsealed and sent to the markets in Shanxi Province, causing discussion among production and warehouse staff.

Although the Shanxi Province Quality and Technical Supervision Bureau’s report said that the chlorine detected in Fanta was much higher than international standards, two other agencies, the Food Quality Safety Supervision Testing Institute of Shanxi Province and the Shanxi Entry-Exit Inspection and Quarantine Technology Center, reported that the beverages were safe. They claimed that the chlorine detected in all samples of the nine batches sent to them was below 0.005mg/L, that is, below the limit for international standards of safe drinking water.

But they did not publish their tests of the material online, and China Entrepreneur, a media company, has raised doubts about the reliability of the bill of health.

Netizens have argued that the latter two agencies attempted to quash the report of high chlorine levels in the released batches, simply to avoid problems.