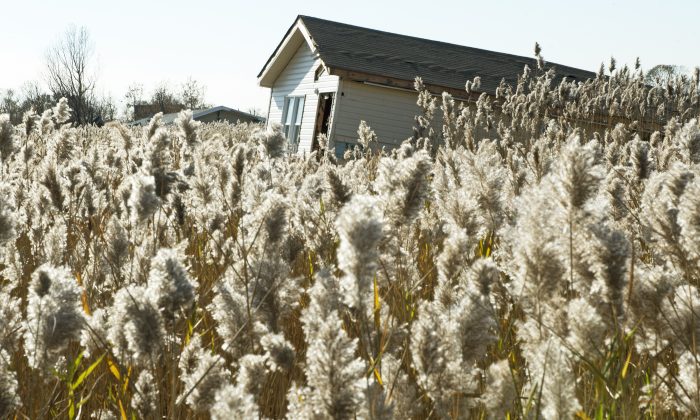 A part of a house that floated off its foundation when Superstorm Sandy hit sits in the middle of a coastal estuary in the Oakwood Beach area of Staten Island, New York, in November 2012. (Paul J. Richards/Getty Images)
New York

Almost $2 billion, mostly to protect 83 miles of exposed coastline throughout the state, will go to coastal protection and flood control. The remaining $147 million will be spread out between three New York City regions and several other locations in the state.

In Staten Island some work is already underway on building up earthen levees to buffer storm surge and home buyouts to reclaim natural wetlands.

Staten Island is marked for part of the plan’s $368 million for home buyouts. The voluntary program allows homeowners to sell at pre-storm value to the state, which then razes the homes and returns the land to its natural state.

The practice is widely considered a win-win for government and residents, and a boon to the natural environment’s built-in ability to protect the coastline from major weather events like hurricanes.

“The whole geography of the landscape will be transformed in a way that will absorb stormwater and benefit uplands homes,” said Eric Goldstein, a lawyer for the Natural Resources Defense Council, an environmental group that has been tracking New York’s resiliency initiatives. Goldstein said benefits will include the “beauty of a natural setting without the danger” faced during storms.

After homes are bought by the state and destroyed, the neighborhood will be replaced with a natural buffer, including tide gates, a maritime forest, a breakwater reef, tidal wetlands, and earthen levees.

Two miles of walkways and wildlife observation points will also be created.

Goldstein said that though there are limited funds for the state’s buyout program, it’s imperative that the Oakwood Beach program be expanded to adjacent neighborhoods.

“The alternative is to spend money and rebuild and repair,” he said. “This is a strategy that makes sense in terms of protecting lives and property. We want to spend recovery money wisely.”

In reality, those taking part in buyouts often describe the experience as bittersweet, knowing that they have options for their future, but pained to see their home bulldozed to the ground.

“There were a lot of tears shed when they first started knocking down their homes in Oakwood Beach,” said Joe Tirone Jr., leader of the Oakwood beach buyout committee. “Many people were very emotional about it because the reality sets in that it’s really over, they are never going back. They had no choice, and they knew that they had no choice. This was a Godsend that they had the ability to move on.”

Nicole Malliotakis, a member of the New York State Assembly who represents Oakwood Beach and Ocean Breeze, which are participating in the buyout program, said many of her constituents are actively seeking buyouts in part because they don’t know how and when other types of help will come.

“People are looking for buyouts, and I don’t blame them, because it really is the most viable option at this point,” said Malliotakis. “There are a lot of uncertainties with the city’s programs that are offering funding. People don’t know how much they will be able to get to rebuild their homes.”

The state is buying homes at pre-market value, which on Staten Island’s eastern and southern shores is about $400,000.

“It has been a very stressful experience for everyone,” she said.

Cuomo’s plan, which he billed as a “re-imagining New York for a new reality,” focuses on statewide plans for infrastructure, transportation networks, energy supply, coastal protection, a weather warning system, and emergency management.

“After what we went through we literally have to re-imagine New York,” said Cuomo in his State-of-the-State address on Jan. 8. “Extreme weather in many ways changes everything.”