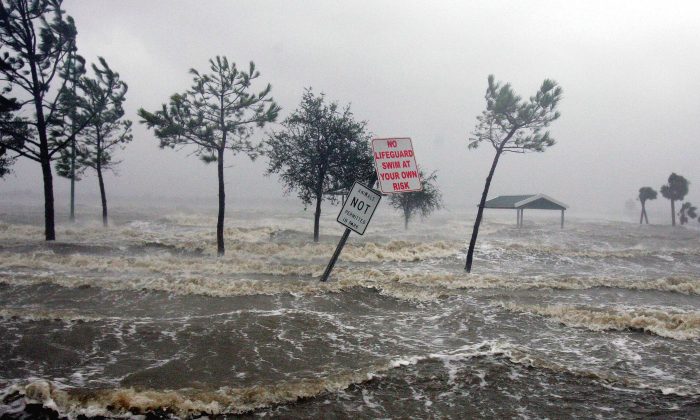 Swirling floodwaters of Lake Charles lap onto the shore in the port city of Lake Charles, La., following landfall of Hurricane Rita in this Sept. 24, 2005 file photo. (AP (Photo/Ric Feld, File)
US

CAMERON, La.—Vacant slabs, weed-choked lots, and solitary stairs to nowhere permeate this tiny town in southwest Louisiana. All that remains of the Klean-N-Kruise car wash is a rusted white sign overlooking an empty, overgrown lot. Residents travel 30 miles away for anything they can’t get at the local gas station because there is no grocery store.

And everywhere there are the campers.

Hurricane Rita was one of the fiercest storms on record when it roared ashore near the Texas/Louisiana border on Sept. 24, 2005. Coastal towns splintered as seawater pushed 20 miles inland and tornadoes wrecked homes. At least 11 deaths in Texas and Louisiana were blamed on the storm, which caused more than $11 billion in damage and sparked one of the largest evacuations on record.

In any other year it would have been the worst hurricane of the year. But this was the year of Hurricane Katrina. And the communities along Louisiana’s western coast felt abandoned. They still do.

As Katrina’s 10-year anniversary was marked by a week of events including visits from three American presidents, in communities along the western coast where people still live in small trailers in their yards because they can’t afford to rebuild, Hurricane Rita’s wrath is ever-present.

“People would like to move back. It’s just so costly. You’ve got to build up,” said Shon Manuel, who stays in a camper in Cameron to be close to his business, Dockside Bar & Grill. “It’s like they don’t want you here.”

Rita struck as a category 3 hurricane with 120-mph winds and a storm surge reaching as high as 20 feet, swamping small towns across southwest Louisiana and ravaging southeast Texas.

Intent to not see a repeat of Hurricane Katrina where tens of thousands did not or could not evacuate, officials ordered people out across the region in one of the largest evacuations in U.S. history. But even that was dangerous. More than 100 people died in the chaotic, pre-storm evacuation of the Houston area, including 23 nursing home patients who perished when their bus burst into flames. Millions fled and got stuck in traffic jams in sweltering heat.

When the hurricane arrived, seawater pushed as far as 20 miles inland, drowning acres of rice, sugarcane fields, and pasture for cattle. Thousands of cows drowned. Rita spread devastation across whatever portion of Louisiana’s coastline Katrina had spared, with damage reaching 150 miles east of where the storm came ashore.

Forty percent of all structures in Cameron Parish, a coastal community next to the Texas border, were completely destroyed. Even now, it has yet to fully recover. Cameron Parish had about 10,000 residents before Rita. That’s fallen to fewer than 6,700 since the storm, according to U.S. Census data.

People who have struggled with the increased costs of rebuilding stay in small trailers or campers in their yards, a stone’s throw from beautiful new homes hoisted high above the ground.

Many people have never returned since Rita’s wind and water reduced homes to shards and stripped some lots bare.

“It’s not recovered, I don’t think, because the people’s not back,” said Tressie Smith, who owns the Anchors Up Grill on the main highway through town. “We don’t have enough people here. It’s not like home.”

Despite the widespread destruction, Rita was dwarfed by Katrina’s $151 billion damage toll and loss of life. Katrina struck southeast Louisiana and Mississippi a month earlier, killing more than 1,800 people. When the levees broke, 80 percent of New Orleans flooded.

“To this day, we’re the forgotten Rita victims,” said John LeBlanc, mayor of the small town of Erath in Vermilion Parish.

Despite the widespread destruction, Rita was dwarfed by Katrina’s $151 billion damage toll and loss of life.
— Shon Manuel, business owner

Residents of southwest Louisiana lamented what they called “Rita amnesia,” saying it took them longer to get aid because they struggled to draw attention to their devastation.

“This place, it was like a bomb was dropped on it. It was that bad,” Manuel said. “It makes me mad. New Orleans was talked about so much, and all these little towns, it was all wiped out.”

Eventually, assistance started flowing and recovery came to most of southwest Louisiana.

Vermilion Parish—the coastal, Cajun parish to the east of Cameron Parish—dug out and rebuilt.

It took two years for the local grocery store to reopen in Erath, and the strike of Hurricane Ike in 2008 re-flooded homes that hadn’t been elevated. But the town and Vermilion Parish haven’t lost population.

This place, it was like a bomb was dropped on it. It was that bad.

“We didn’t just stand there with our hands out. People here, we’re Cajuns. We started working,” LeBlanc said.

Nearby Calcasieu Parish, which took extensive wind damage from Rita, is booming, with billions in industrial projects planned. But in the parish’s largest city, Lake Charles Mayor Randy Roach worries about his neighbors to the south.

“The social fabric of the area has been ripped apart in Cameron,” he said.

He points to rebuilt infrastructure, the hospital up and running, reconstructed schools, and fire stations. And he said the rebuilding—with nearly every new structure raised on stilts—has made buildings safer.

“We have quite a few residents that have rebuilt in a more resilient and hardened fashion, and that in my opinion would be one of the successes from Rita,” Bourriaque said.

Buildings like the hospital comply with new FEMA flood plain regulations requiring structures to be highly elevated. But many people here blame FEMA’s regulations, saying the elevation standards have made recovery in Cameron difficult.

Smith and her husband used a federal grant to buy a used trailer and raise it more than 12 feet in the air. But she said the town has changed.

“We’ve always been a close-knit community. Everybody knew everybody. It’s not like that anymore,” she said. “But hopefully one day it will be. I hope.”