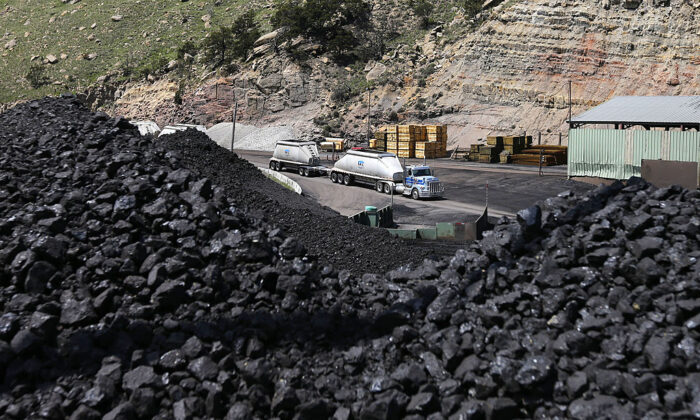 Piles of coal wait to be loaded into trucks at the Sufco Coal Mine, 30 miles east of Salina, Utah, on May 28, 2014. Sufco is one of four mines operated by Wolverine Fuels, a company that has threatened to sue the city of Richmond, Calif., if it imposes a ban on coal that would cut off a major export port for Wolverine. (George Frey/Getty Images)
By Brad Jones

A coastal city in California is moving to ban coal exports, shutting down a port that handles about one-quarter of the coal exports from the U.S. West Coast.

While many media reported that Richmond’s city council passed the ban into law on Jan. 14, the ordinance only passed one round of voting and it will go to a second reading sometime in the next few weeks before the council takes a final vote.

Richmond Mayor Tom Butt, who is a big supporter of the ban, told The Epoch Times, “It’s pretty well known that coal is among the worst—if not the worst of fossil fuels—for air pollution, contributions to greenhouse gases and global warming. It’s really an unfortunate choice and it’s really unfortunate that it’s still around.”

But opponents warn that a ban would result in lost jobs—both at the local terminal and at the Utah mines where the coal originates—and a costly court battle. Other coastal cities have similarly moved against the coal industry, including Oakland where a ban went into effect in 2016. In 2018, a federal judge repealed Oakland’s ban, and the city is currently appealing that decision.

The coastal ports serve a growing demand for coal in Asian markets. Richmond handles about one million metric tons of the fuel annually, much of which is bound for Japan to meet its electricity needs following the discontinuation of its nuclear energy program. Richmond’s terminal also ships petroleum coke to other countries, mainly for use in manufacturing.

Environmental activists view the ban on coal as a way to reduce local pollution from coal dust and cut greenhouse gas emissions globally. Richmond’s coal ordinance states that businesses must phase out coal and petroleum coke within three years.

“We are disappointed with the vote and continue to urge that the City Council reject the proposal and instead adopt the Planning Commission’s unanimous recommendation to ‘get the facts’ before they vote on the ordinance,” said Barbara O’Neill, vice president of the Levin-Richmond Terminal Corporation (LRTC) which operates the terminal. “The stakes are high. Adoption of this ordinance threatens jobs and will result in years of litigation,” she said in an email.

One of “the facts” O’Neill refers to is an assessment of local air quality related to the coal dust.

In 2017, former Governor Jerry Brown signed into law Assembly Bill 617, an air quality management program. It includes the use of new air pollution monitoring technologies to assess air quality in communities. O’Neill urged city council to delay any further action on the coal ordinance until the study mandated under AB 617 is complete.

“We are hopeful the City Council will reconsider,” she said. “If not, we will be forced to pursue litigation to protect the interests of our employees and our company.”

The LRTC has said that it cannot replace coal with other exports, as proponents of the coal ordinance suggest. Petroleum coke and coal account for 80 percent of its business.

A Berkeley Research Group economic analysis confirmed that LRTC could not replace these fossil fuel exports because there is no current, economically viable market for other commodities suitable for the Richmond facility.

“We are proud of our 38-year history in the Richmond community,” O’Neill said. “We want to continue to be among Richmond’s valued businesses and continue to provide good-paying, important jobs to Richmond and East Bay workers,” she said. “However, adoption of the ordinance will put LRTC out of business and eliminate these jobs.”

The city received a letter last month from Wolverine Fuels, a company that extracts coal from three Utah mines and ships it to the Richmond port.

Wolverine’s lawyer Brian Settles said in the letter that the company would be left with no choice but to take legal action against the city if it imposes the ban. A spokesman for Wolverine Fuels could not be reached for comment as of press deadline.

When asked about the expected loss of jobs and negative economic impact the ordinance could cause, Mayor Butt said the plan allows for coal exports to be phased out rather than immediately shut down.

“A lot of this is just posturing,” he said. “The bottom line is that this is not going to happen for years. There’s a lot of what-ifs going on here. There is a provision in the ordinance to extend the period of time [to transition away from coal], which may or may not happen. The parties have all threatened litigation so this could go on for 10 years.”

“Or, it could be that if coal is not economically feasible five years from now, with coal companies shutting down all over the place, going bankrupt … it may go away on its own accord before it’s forced.”

Chris Snyder, spokesman for the International Union of Operating Engineers, Local 3, said that 50 union jobs will be lost if the terminal shuts down.

“They are good private sector union jobs. We are dedicated to doing anything we possibly can to keep that place open,” Snyder said. “It’s just a really sad loss, when the money could be spent on upgrades and phases for long-term solutions. It’s short-sighted and it’s a tragedy for workers and their families.”

In addition to the 50 union jobs, another 10 to 20 management, office, and clerical jobs would also disappear, he said.

Snyder said the union is threatening legal action against the city. “We looked at it, and the city can’t prevent interstate commerce.”

He disagrees with the mayor’s negative perception of the low-sulfur coal handled at the Richmond facility.

“It’s not true,” Snyder said. “This is some of the cleanest burning coal. It burns cleaner than gas.”

Other sources of coal in China, for example, are much dirtier, he said.