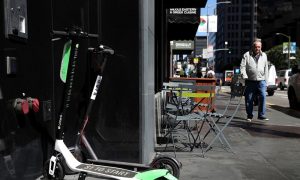 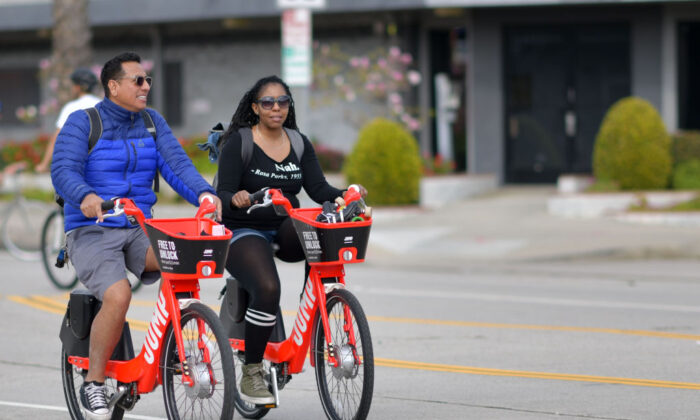 People ride Uber's JUMP e-bikes in car-free streets during a CicLAvia event in Culver City on March 3, 2019. CicLAvia is a non-profit organization that hosts events where people can bike, walk, skate and stroll on car-free streets. (Chris Delmas/AFP via Getty Images)
Southern California

Coastal Cities are Cracking Down on E-Bikes

San Clemente city council placed some restrictions on electric bicycles (e-bikes), with a few others to be considered during an upcoming meeting.

The San Clemente Beach Trial is a multimodal trail that previously allowed e-bikes and bikes to pass through. Public complaints prompted council Feb. 16 to require all bikes to be walked along Mariposa Bridge.

“The city’s goal is to always provide a safe place for all recreation users,” recreation manager Samantha Wiley told The Epoch Times.

“This effort in education is really the first step in ensuring that we’re providing safe facilities and informing our users of the proper use to share that space … All different users have to work together to ensure the safety of the trail and all the patrons of the trail whether that’s children, or elderly, whoever uses that trail. It’s got to be a concerted effort by all parties.”

The city has seen an enormous increase in the number of bikes, e-bikes, and pedestrians on the trial, Wiley said, but a boost in pedestrian traffic has been accompanied by bolstered concerns about public safety.

“Based on feedback and comments received from the community, and concerns about the safe use of e-bikes on the trail, council requested that the beaches, parks and recreation commission review the use of e-bikes, again, on the beach trail and within city facilities,” Wiley said.

The updated ordinance bans Class 3e-bikes, which are speed e-bikes that provide pedal-assistance until the bike reaches 28 miles per hour (mph). For comparison, Class 1 and Class 2 e-bikes stop providing assistance at 20 mph.

Wiley said that a ban on Class 3 e-bikes has “always been a rule, but now it’s actually spelled out in the city ordinance.”

The council moved to leave the bike speed limit at 10 mph, instead of lowering the speed limit to 5 mph, as recommended by the city.

Council will go through the second reading of the ordinance on March 2, and will need a majority vote to pass. The ordinance includes details such as not riding a bike on an open field and staying on paved trails.

The city is working with the Orange County Sheriff’s Department to educate parents and the public about the rules of the trails.

There is also a hotline for individuals wishing to submit complaints and feedback about e-bikes on the beach trail and in the park system.

“[This] is going to be an effort to inform the users and then also give them an avenue to report incidences that they see or express their concerns or things that are going really well,” Wiley said.

In Huntington Beach, police are embarking on their own educational blitz as they work to educate the public about e-bike regulations. They’ve posted information on social media platforms, and hung signs on the Beach Service Road.

The city prohibits e-bikes on all bike paths, while banning both bikes and e-bikes on the pier.

Smith said the department has seen an “increase in the number of complaints regarding excessive speed on the service road, which has led to accidents and near misses,” in regard to e-bikes.

Riders who knowingly violates this law can be fined up to $50. Fines for subsequent violations can be up to $100.

Officers have also reached out to downtown vendors who rent e-bikes (and e-scooters) to educate them about the local regulations, and requests they educate their customers.

“Historically, we have had officers, including motorcycle and bicycle officers, work directed enforcement on the Beach Service Road to educate the public on applicable rules and regulations, and to take enforcement actions when necessary,” Smith said.