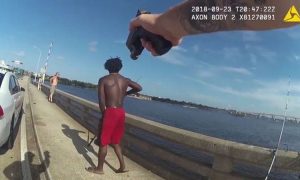 Video: Man Throws Another Man Off Florida Bridge, Officer Then Pulls His Gun
0 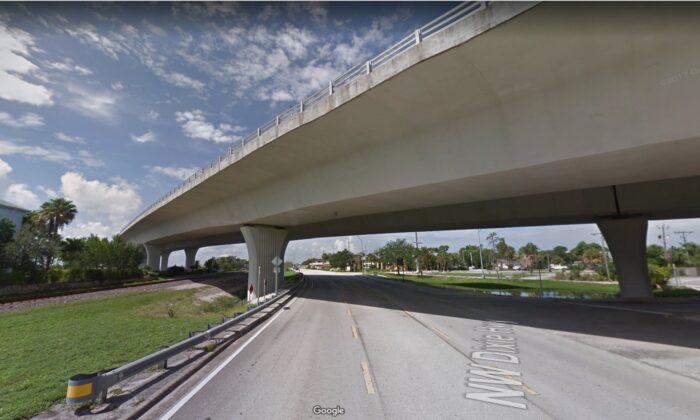 A section of the Roosevelt Bridge in Stuart, Fla., in 2017. (Google Maps)
US News

The U.S. Coast Guard has warned people to steer clear of the Roosevelt Bridge in Stuart, Florida, “due to the risk of imminent collapse,” according to local reports and official statements.

Officials have closed both northbound and southbound lanes of the bridge, along with Old Dixie Highway, according to the Stuart Police Department.

🚨🚨Update – we have had to shut down both bridges south and northbound lanes on both Roosevelt Bridge and Old Dixie Hwy.

Updates will be coming pic.twitter.com/KfXprp7nyA

The police said in a statement that reports were received on Tuesday that “portions of concrete” fell off of the bridge and onto NW Dixie Highway below.

Boating traffic through the area is being managed by the Florida Department of Transportation (FDOT) and the Coast Guard, which said in a statement that all commercial maritime traffic going under the affected portion of the bridge had been halted.

“The @USCG has established a #safetyzone stopping any commercial maritime traffic from transiting under the Roosevelt Bridge in Stuart, Fla. The #USCG is working w/ @MyFDOT & other local agencies in the area for the bridge closure,” the Coast Guard wrote in a tweet.

People at a restaurant in the vicinity of the bridge spotted a large crack on Wednesday night, according to WPTV reporter Meghan McRoberts, who shared a photo of the underside of the bridge, revealing a substantial void.

“All stations, all stations, this is United States Coast Guard Center Miami, Florida. All vessels are required to keep clear of the new Roosevelt Bridge until further notice, due to the risk of imminent collapse,” the Coast Guard transmitted via scanner shortly after 2 a.m. Wednesday, according to a WPTV report.

George Denti, an engineer and project manager at FDOT when the Roosevelt Bridge was constructed in 1997, told TCPalm that he was surprised by the Coast Guard’s warning.

“I’m definitely surprised about what has happened. It’s a new bridge, and up to this point I haven’t heard of any problems with it,” Denti told TCPalm Wednesday.

“Generally, when there is a failure, there is some sign like leaking, but none of that was mentioned in bridge reports,” Denti told TCPalm.

Mateusz Furs, an engineer and CEO of concrete repair company Inblock, told The Epoch Times that pre-stressed concrete construction bridges like the one in Stuart are not only “frequently and regularly inspected” but are typically covered in an inelastic paint that cracks along with the underlying concrete and helps inspectors spot cracks.

After viewing photographs of the damage, he said, “one possibility is that the concrete may have been mixed improperly.”

Recalling an incident in 2018 of a bridge collapse in Genoa, Italy, which killed 43 people, Furs said that in pre-stressed concrete construction like the Roosevelt Bridge, inspectors should pay special attention to load-bearing substructures.

“The size of the popout suggests significant forces may have been at play,” he said, adding that “the tendons should be checked for structural integrity to reduce the risk of a tragic collapse.”

Sgt. Brian Bossio, Stuart police spokesman, told TCPalm that any moves to gauge when traffic can resume depends on a thorough inspection.

“We’re going to be waiting obviously for the bridge to be evaluated, and once it’s deemed safe we’ll reopen everything,” Bossio said. “But right now we have no idea how long we’re looking at before it’s reopened.”