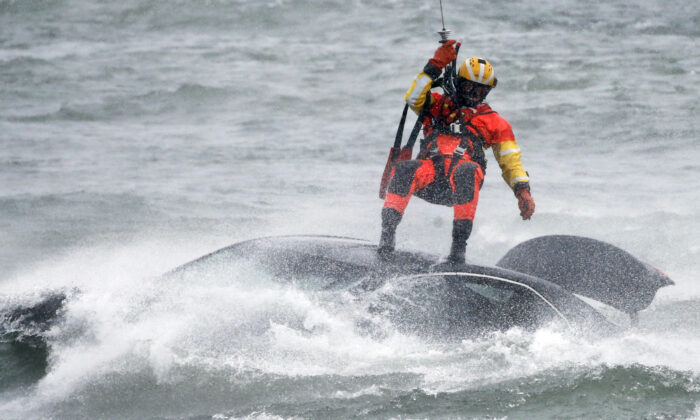 One of the many times that Coast Guard rescue swimmer James faced death was when rough weather caused him to swing full-speed from a helicopter straight at a crab boat’s steel superstructure.

“I was swinging at that thing so fast. I just knew I was gonna hit it, and I was gonna die,” he said. “But at the last minute, I just barely cleared it, and I could feel it going right underneath [me].”

On the job, rescue swimmers have so many close calls that they tend to forget about them, James said. Pulling sailors from icy water into helicopters requires peak physical fitness, extensive skills, and a fearless disposition.

Rescue swimmers endure Navy SEAL-style boot camp that sometimes weeds out 80 percent of candidates. But rescue swimming is all pain and no fame because few outside the Coast Guard know what they do, James said.

“You know what a Navy Seal is. You know what a firefighter is and a police officer. But nobody knows who we are,” he said. “The difficulty of our training is on par with the other elite operators in the military. Our missions are just as difficult, but in a different way.”

There are only about 320 rescue swimmers nationwide and few new recruits, he said.

Now, at least 35 rescue swimmers, including James, are facing a new challenge. They’re on a collision course with the Coast Guard because the military won’t stop pressuring them to take the COVID-19 vaccine.

James and other rescue swimmers say the Coast Guard’s vaccine campaign has threatened their pensions, persecuted unvaccinated Coast Guardsmen, and destroyed trust in the chain of command.

To retire with a Coast Guard pension, rescue swimmers must spend 20 years in the service. All of the rescue swimmers interviewed for this story are near retirement and chose to remain anonymous in order to protect their pensions. Coast Guard officials didn’t respond to a request by The Epoch Times for comment.

In 2021, the military mandated the COVID-19 vaccine for Coast Guard rescue swimmers.

Many swimmers didn’t see the point of getting vaccinated, James said. Throughout the COVID-19 pandemic, they continued to perform their jobs.

“When there was no vaccine, we were going out on medevac hoisting people off of boats in the middle of the ocean who were COVID-positive,” he said. “We’ve never had any issues.

“You’re also talking about the healthiest people in the Coast Guard.”

James noted that rescue swimmers are one of the least likely demographics to die of COVID-19.

Rescue swimmers who face sharks, high seas, and death-by-drowning daily are willing to risk getting COVID-19, he said.

So when rescue swimmers learned that studies linked the vaccine to myocarditis and other medical conditions, some of them refused to take it, James said.

“I’m just not willing to risk my long-term health over it.”

John, a senior rescue swimmer, said one person at his Coast Guard base developed a heart condition after taking the vaccine.

“This person was an avid runner. This person hiked all the time and then couldn’t do any of those things after they got their vaccination,” he said. “And I’m like, why would we even risk that? I don’t understand.”

The vaccine is the latest in a long line of Coast Guard rules that have made it harder for swimmers to save lives, according to Peter, another rescue swimmer.

During the pandemic, the Coast Guard put maintaining COVID-19 quarantines above the readiness of rescue swimmers, he said.

Even the slightest exposure to someone with COVID-19 put swimmers on a mandatory 14-day leave from work, Peter said. This policy left Coast Guard stations undermanned and overworked.

John said that when a rescue swimmer caught COVID-19, even vaccinated swimmers near them had to quarantine.

“It took random amounts of people out of our job,” he said. “But we were expected to still perform with the same quality and efficiency.”

Peter said, “The Coast Guard and other organizations were shooting themselves in the foot.”

While COVID-19 has spread across the United States, unvaccinated Coast Guardsmen weren’t allowed to travel more than 50 miles from their duty stations without permission, according to Peter.

“I go to the grocery store right down the street from my duty station,” he said. “No one’s wearing masks.”

If rescue swimmers retire or are discharged from the service because they won’t take the vaccine, the remaining people will have less ability to take up the slack, Peter said.

Official military health guidelines offer personnel several routes to avoid vaccination. Service members can refuse to take a vaccine if they have a temporary or permanent health condition that a vaccine could affect, a planned retirement in 180 days, or a religious exemption.

Religious exemptions come with qualifications, however. Exemptions may be granted “according to Service-specific policies.” Military command can reject an exemption request. But a service member can appeal the rejection.

“Military members should follow guidance from their chain of command for appealing an exemption decision,” military health guidelines read.

Some elements of the Coast Guard’s vaccine policy appear to contradict normal military guidelines. First, the Coast Guard stated that personnel 180 days away or less from leaving the Coast Guard are still required to get the COVID-19 vaccination.

“The administrative exemption from deployment (mobility) immunization for service members within 180 days of separation or retirement does not apply to immunization from COVID-19,” its website reads.

The website notes that Coast Guard members without an approved religious exemption will receive punitive action from the Coast Guard, up to and including discharge from service.

Commanders may account for refusal to follow vaccination orders when considering requests for reenlistment, advancement, training, or short-tour requests. But they aren’t allowed to address religious accommodation or deny a service member’s vaccine exemption request just because they asked.

If 35 rescue swimmers left early to avoid getting the vaccine, it would cripple the program in some areas, according to James. Alaska’s rescue swimmer group could lose 30 percent of its swimmers, and Hawaii could lose 40 percent, he said.

With new retirements, the Coast Guard could be 70 rescue swimmers short by the end of summer, Peter said.

Even worse, the Coast Guard rescue swimmer school closed for repairs, which slowed down training, according to John.

A strong push for complete vaccination risks driving away older rescue swimmers and new recruits at a time when no replacements exist, Peter said.

“The first question they ask is, ‘If I join, do I need to get the COVID-19 mRNA vaccine?’” he said of new recruits.

The Coast Guard pushed anyway, James said. It urged rescue swimmers to get vaccinated by Nov. 22, 2021, or face consequences. But it never explained exactly what the consequences would be for refusing vaccination.

This ambiguity was worse than any clear penalty, and the uncertainty tormented rescue swimmers, John said.

“August 2021 to about February 2022 were the most stressful times in my entire career,” he said. “The environment, the workplace, this unsubstantiated pressure. And you can’t get a straight answer from anybody.”

He said leaders told him he would probably be discharged from the Coast Guard, but he said he never received an official answer.

After the deadline, the only penalty was that rescue swimmers couldn’t transfer stations if they didn’t have the vaccine. But later, the Coast Guard allowed unvaccinated swimmers to transfer.

“They keep making these threats. And one and two people will go and get the vaccine,” James said. “They’re bluffing.”

Many swimmers intend to serve a full 20 years in the Coast Guard so they can receive a pension, he said. Expulsion from the Coast Guard might cost their families up to $1 million.

“Every rescue swimmer I know has almost died because of this job,” James said. “And their entire livelihood and their retirement, it’s on the line, and they are still sticking to their religious beliefs.”

The stress rescue swimmers faced made it hard for them to do their jobs, according to John.

“The whole environment at work changed,” he said. “It was a stressful environment.”

John himself said he plans to retire at the earliest date he can receive his pension instead of working another year.

A total of 27 rescue swimmers—about 8 percent of the force—will retire this summer, James said.

“I’ve never seen that many, ever, in my entire career,” he said.

Peter, James, and John all said they plan to retire at the earliest date that gives them a pension.

Sea Change in the Coast Guard

James said the Coast Guard’s attempts to encourage vaccination have destroyed his trust in the military to which he has dedicated nearly 20 years.

“With what I’ve seen over the last two years … I can’t wait to retire,” he said.

Many other Coast Guard members have lost their trust in the service branch as well, James said, blaming the distrust on military leaders.

“The lack of faith that I see in leadership right now, I’ve never seen in my entire career. People are fleeing the Coast Guard like I’ve never seen. Rescue swimmers are getting out before retirement,” he said.

Congress could help rescue swimmers by letting them choose whether to get vaccinated, John said. Even a clear explanation of the decision-making process would help.

He said rescue swimmers don’t understand why the Coast Guard has rewarded years of dangerous service with demands to vaccinate or get out.

“You put it all out there every time you do it,” John said. “And now you’re gonna tell me that that means nothing?”