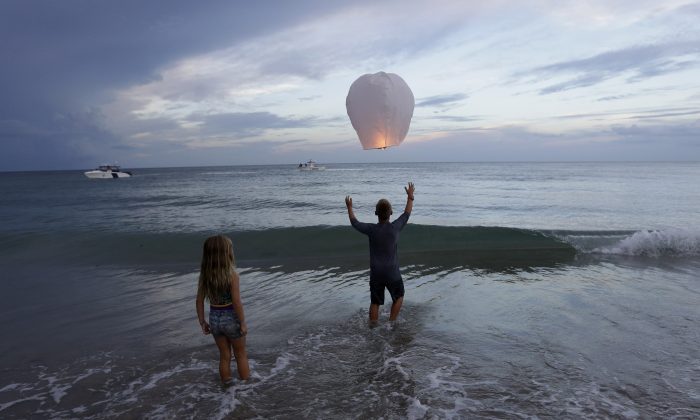 Coast Guard Official: Search for Teens Is ‘Active and Open’

TEQUESTA, Fla.—Coast Guard and state officials visited the Florida home of one of two missing teenage boaters Wednesday, and a spokesman told news reporters the search for the boys is still “active and open.”

The Coast Guard and Florida Fish and Wildlife officers were at the home of 14-year-old Perry Cohen for almost an hour Wednesday afternoon.

As they left, Fedor offered no further comment and didn’t take questions.

Earlier, a U.S. official in Washington had said the Coast Guard was suspending the search.

teeCrews have been searching for Cohen and Austin Stephanos for six days.

The teens’ capsized boat was found Sunday, and the Coast Guard said it was searching the waters from Daytona Beach, Florida, to South Carolina.

The Coast Guard’s relentless hunt for the young fishermen had entered its sixth day with questions growing over how long it could go on. Decision-makers were juggling a mix of “art and science,” Chief Petty Officer Ryan Doss said, trying to balance the knowledge of how long people can survive adrift with the unknowns on whether the boys had flotation devices and drinking water and what their physical condition is.

“We know it can happen,” Doss said of finding the boys alive, “and we’re hoping it happens again.”

Laurence Gonzales, author of “Deep Survival: Who Lives, Who Dies, and Why,” said the general rule of thumb is humans can stay alive three minutes without air, three days without water and three weeks without food but examples of defying that abound. The longest someone has been known to survive in the open ocean without water was about five days, he said, but the unknowns about the teens mean anything is possible.

“People will constantly surprise you,” said Gonzales, an author of four books on survival whose own father was a World War II pilot who survived being shot down. “You’ll think, ‘Surely this guy is dead.’ And you’ll go out and there he will be alive.”

Dr. Claude Piantadosi, a Duke University medical professor who authored “The Biology of Human Survival: Life and Death in Extreme Environments,” said “the odds are against” the boys, but the search should continue. He wondered if they could be clinging to a cooler believed to have been aboard the boat and maybe used it to catch rainwater. Even so, the former Naval officer and avid boater and diver knows they are fast reaching the edge of survivability.

“Every hour that passes at this point,” he said, “the chances go down.”

Each year, Florida waters swallow a small number of boaters — people who venture out and never return. In 2013, when Florida had 56 boating fatalities, it also had nine missing boaters — people who were never found and are presumed dead, according to the state Fish and Wildlife Conservation Commission. In 2014, there were 64 fatalities and six missing boaters. The commission could not break down how many of these accidents happened in the ocean, the Gulf of Mexico or a lake or river.

Five hundred feet above the Atlantic on Tuesday, an eight-person Coast Guard crew aboard a C-130 plane flew in a grid pattern to survey the ocean below. Two men flopped on their bellies on a cargo ramp, scouring the waters, while other crew members searched from the windows or used a joystick to manipulate a camera scanning the seas.

Mostly they saw vast expanses of water – some of it murky, some so clear turtles could be seen swimming 50 feet below the surface.

Occasionally, they spotted something and looped around, sometimes dropping flares.

A white rectangular shape that looked like a pillow. A box. Something greenish. But none of the items turned out to be worthwhile clues.

“Frustrating,” one crew member remarked on their headset.

After nearly 10 hours of flying, without success, the crew looked bleary and tired as it diverted the plane around a lightning storm on its way home. Even without any major break in the search, the crew knew the importance of their work.

“You search like it’s your mom out there,” Petty Officer Garrett Peck said.

The saga of the two boys from Tequesta, Florida, began Friday. Their parents believed their fishing outing would take them to a local river and waterway, as was the rule in previous solo trips, not the deep waters of the Atlantic. A line of summer storms moved through the area that afternoon, and when the teens didn’t return on time, the Coast Guard was alerted. Their 19-foot boat was found overturned Sunday off Ponce Inlet, more than 180 miles north of where the boys started.