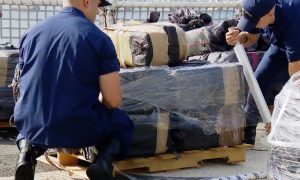 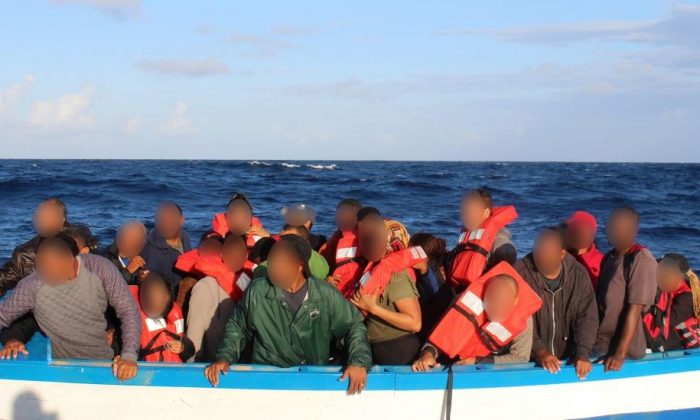 The Coast Guard intercepted a vessel with 35 people on board headed to Puerto Rico approximately 34 miles west of Desecheo on Jan. 7, 2019. (Coast Guard)
Crime and Incidents

The Coast Guard intercepted a vessel with 35 people on board headed to Puerto Rico, the agency said on Jan. 10.

The people on board were all Dominican Republic nationals.

The crew of Coast Guard Air Station Miami HC-144 Ocean Sentry detected the vessel and the Coast Guard Cutter Heriberto Hernandez was sent to intercept it.

Coast Guardsmen also discovered a backpack with four kilograms (just shy of 9 pounds) of heroin floating near the vessel.

“While this interdiction is certainly a success of Coast Guard operational units through Operation Unified Resolve partnered with the Caribbean Border Interagency Group, it is also a symptom of a serious threat to our national security and maritime borders where narcotics smuggling is paired with illegal migrant ventures,” said Capt. Jason Ryan, chief of enforcement for the Coast Guard 7th District, in a statement.

“Together with other DHS components and local law enforcement partners, we will continue to diligently patrol throughout the Caribbean Basin and Florida Straits to stem the flow of maritime smuggling and criminal organizations that bring violence to our shores and fuel the growing epidemic of drug use and overdoses throughout our country.”

On Jan. 10, 27 of the migrants were sent back to the Dominican Republic.

The other eight were transferred into the custody of the Department of Justice’s District of Puerto Rico for further investigation and possible prosecution. One of the eight is a suspected smuggler who may have been involved in another smuggling operation in which several migrants died.

The Coast Guard and its partners have made multiple interdictions in the Caribbean in the past few months.

A vessel with four migrants aboard was intercepted on Dec. 24, 2018, about 17 miles northeast of Samana, Dominican Republic. Crews found approximately 100 kilograms (220 pounds) of cocaine aboard.

On. Nov. 10, a vessel with 20 migrants aboard was found just 3 miles northeast of Mayaguez, Puerto Rico. Coast Guard crews found approximately 248 milliliters (just over 8 ounces) of Fentanyl aboard.

Good evening Saint Ignace. Java Joe just realized the Coast Guard is not being paid during this government shutdown therefore Java Joe’s will give any member of the Coast Guard a free breakfast.

A Michigan restaurant owner who is irate over the government shutdown is offering Coast Guard members free food.

He claimed that lawmakers “don’t even think about these people.” Durm announced the offer on Facebook on Dec. 27.

“Good evening Saint Ignace. Java Joe just realized the Coast Guard is not being paid during this government shutdown, therefore Java Joe’s will give any member of the Coast Guard a free breakfast,” Durm wrote.

Many said they’d be going to the restaurant after Durm’s announcement to show their support for his offer to the Coast Guard.

The Coast Guard was the only military department affected by the partial government shutdown and members were facing a potential pay delay.

But the White House, the Department of Homeland Security, and the Coast Guard found a way to pay the workforce on Dec. 31, the Coast Guard’s official blog stated on Dec. 28.

The one-time action did not guarantee a paycheck on Jan. 15.

According to the Washington Examiner, President Donald Trump personally intervened to make sure the Coast Guard was paid.

“President Trump personally urged his team to find a solution that would allow the administration to make this week’s $75 million payroll,” officials told the outlet. “The president is trying to make the shutdown as painless as possible for workers, and this case proved it,” said one official.

On Twitter, Trump said after the announcement that the Coast Guard members would be paid, “Great work by my Administration over the holidays to save Coast Guard pay during this shutdown. No thanks to the Democrats who left town and are not concerned about the safety and security of Americans!”