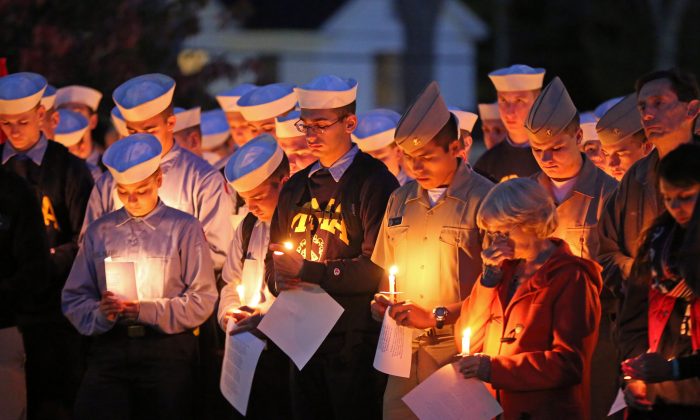 Maine Maritime Academy students bow their heads during a vigil of hope for the missing crew members of the U.S. container ship El Faro, Tuesday evening, Oct. 6, 2015, in Castine, Maine. The Coast Guard has concluded the vessel sank near the Bahamas during Hurricane Joaquin. Four graduates of Maine Maritime Academy are missing. They are Capt. Michael Davidson of Windham, Maine, Michael Holland, 25, of Wilton, Maine, Danielle Randolph, 34, of Rockland, Maine, and Dylan Meklin, also of Rockland. (AP Photo/Robert F. Bukaty)
US

The Coast Guard said it will end its search for survivors from the El Faro on Wednesday evening, according to Robert Green, father of LaShawn Rivera. He said the Coast Guard informed relatives during a briefing at the Seafarers Internatonal Union hall in Jacksonville that the search would end between 6 p.m. and 7 p.m.

The 790-foot cargo ship sank Thursday off the Bahamas during Hurricane Joaquin, a Category 4 storm with 140 mph winds that was producing 50-foot waves. Officials say the ship’s captain had plans to go around the storm as he headed from Jacksonville, Florida, to Puerto Rico, but the El Faro suffered unexplained engine failure that left it unable to avoid the storm.

Earlier, federal investigators said they still hope to recover a data recorder from the ship as search crews continue looking for any survivors.

The National Transportation Safety Board sent a team to Jacksonville on Tuesday to begin the agency’s inquiry, which will help determine why the captain, crew, and owners of El Faro decided to risk sailing in stormy waters.

We leave no stone unturned in our investigation and our analysis.
— Bella Dinh-Zarr, vice-chairman,, NTSB

“We will be looking at everything. So, we leave no stone unturned in our investigation and our analysis. We want to find every bit of information that we possibly can,” Bella Dinh-Zarr, NTSB vice-chairman, said.

In addition to the voyage data recorder—which begins pinging when it gets wet and has a 30-day battery life—the board will focus on communications between the captain and the vessel’s owner.

Another question is whether the five workers whose job was to prepare the engine room for a retrofitting had any role in the boat’s loss of power, which set the vessel adrift in the stormy seas. Officials from Tote Inc., the vessel’s owner, say they don’t believe so.

But the question—along with the captain’s decision to plot a course near the storm—will help investigators figure out why the boat apparently sank near the Bahamas, possibly claiming the lives of all 33 aboard.

The ship is believed to have gone down in 15,000 feet of water after reporting its last known position last Thursday. One unidentified body has been found.

The 41-year-old El Faro was scheduled to be retired from Caribbean duty and retrofitted in the coming months for service between the West Coast and Alaska, said Tote executive Phil Greene.

The El Faro and its equally aged sister vessel were being replaced on the Jacksonville-to-Puerto Rico run by two all-new ships capable of carrying much more cargo and emitting less pollution.

When the El Faro left Jacksonville on Sept. 29, five workers from Poland came along with 28 U.S. crew members to do some preparatory work in the engine room, according to Greene. He gave no details on the nature of their work.

“I don’t believe, based on the work they were doing, that they would have had anything to do with what affected the propulsion,” said Greene, a retired Navy admiral.

The El Faro had no history of engine failure, Greene said, and the company said the vessel was modernized in 1992 and 2006. Company records show it underwent its last annual Coast Guard inspection in March.

Debris Spotted as Crews Search for Ship Lost Off Bahamas

Sunken US Ship Had Sufficient Lifeboats, but Terrible Storm

“We don’t have all the answers. I’m sorry for that. I wish we did,” saidAnthony Chiarello,  Tote Inc.’s president and CEO. “But we will find out what happened.”

The American Bureau of Shipping, a nonprofit organization that sets safety and other standards for ships, did full hull and machinery inspections in February with no red flags, the company said.

F. John Nicoll, a retired captain who spent years piloting the run to Puerto Rico, said he doubts the age of the El Faro was a factor, noting that there are many older ships plying U.S. waters without incident.

He predicted the NTSB will look into whether company pressure to deliver the cargo on time despite the menacing weather played a role in the tragedy—something Tote executives have denied.

“Time and money are an important thing” in the shipping industry, Nicoll said. He said there should be emails and other messages between the captain and the company to help answer the question.

Tote executives said the captain, Michael Davidson, planned a heading that would have enabled El Faro to bypass Joaquin if the ship hadn’t lost power. The loss of power left it vulnerable to the storm’s 140-mph winds and battering waves more than 50 feet high.

They said that before the storm, Davidson was in regular communication with the company, which can override a captain’s decisions.

Davidson attended the Maine Maritime Academy and has a home in Windham, Maine.

“He was a very squared-away sailor, very meticulous with details, very prudent, which is important when you’re working on the water. He took his job seriously,” said Nick Mavadones, a friend since childhood and general manager of Casco Bay Lines, where he and Davidson worked together.

Still, seafarers who have long experience in the Caribbean say its weather can be treacherous.

“It can go from calm, in a matter of five or six hours, to hell,” said Angel Ortiz, who retired as a merchant mariner after 39 years.