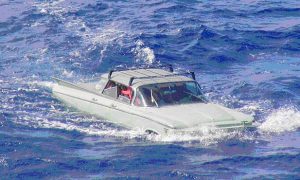 How Long Will America's Special Rules for Cuban Immigrants Last?
0 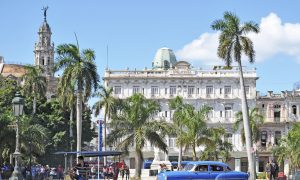 The Cuban Embargo, Through the Eyes of Cubans
0 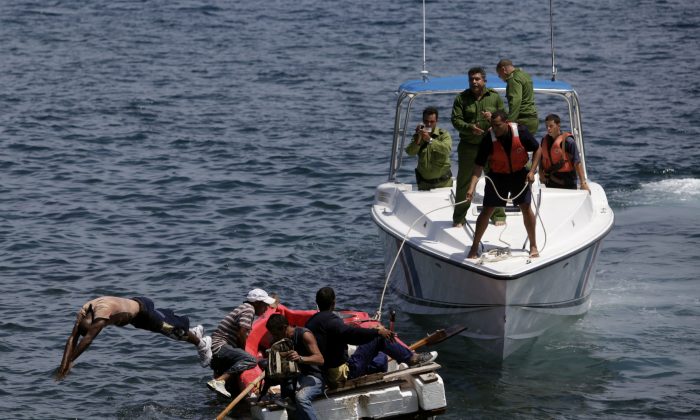 In this June 4, 2009 file photo, Cuban coast guards, right, stop seven men trying to migrate illegally to the U.S. on a foam raft near Havana's Malecon. No one was arrested, according to police. (AP Photo/Javier Galeano)
US

ABOVE THE FLORIDA STRAITS—With a shift in the relationship between Havana and Washington, many Cubans are now attempting a risky sea crossing out of fear that the U.S. will change its “wet-foot, dry-foot” policy allowing any Cuban reaching U.S. land to stay and pursue citizenship.

Without it, they’d be treated like other foreigners caught illegally in the country — ineligible for citizenship and subject to deportation.

The U.S. Coast Guard returns any Cuban migrants caught at sea to the communist island. Authorities have captured or intercepted more than 2,600 since Oct. 1, and that tally is expected to match or surpass last year’s total of nearly 4,000.

How Long Will America’s Special Rules for Cuban Immigrants Last?

“It’s fair to say that this is the ‘Wild West’ of the Coast Guard,” said Lt. Cmdr. Gabe Somma, spokesman for the Coast Guard’s Miami-based 7th District, which patrols the Florida Straits. “We’ve got drugs, we’ve got migrants and we’ve got search and rescue, and we’ve got an enormous area, approximately the size of the continental United States.”

The steady hum of a Coast Guard aircraft flying low loops over these swift, dark blue waters broadcasts a distinct message to migrants: Nothing has changed.

The Coast Guard planes are equipped with sensors that pick out shapes on the water’s surface miles away. From a patrol altitude of about 1,500 feet, cruise ships look like smudges on the horizon and sailboats are white dots with long wakes.

A migrant vessel appears the size of a buoy. Pilots look for something suspicious: waves that don’t break quite right, a dark speck in a cloud’s shadow, the glint of something tossed overboard or the ripple of a blue tarp.

“I’ve seen two guys on a Styrofoam sheet with two backpacks,” Lt. Luke Zitzman said from the cockpit of a recent patrol.

Coast Guard crews will open their cargo doors to toss buckets containing water and food, sometimes their own lunches, down to migrants frantically signaling for help.

They’ve also watched migrants push away life jackets and inflatable rafts thrown down to keep them afloat in deep waters before a Coast Guard cutter arrives. If they can see a shoreline, many migrants will try to swim for it.

“That must be really frustrating, to see that’s freedom but not realize how far away that it really is,” said Lt. Hans de Groot, the pilot of a recent patrol.

Once picked up by the Coast Guard, migrants find themselves transferred from cutter to cutter before they return to Cuba.

Aboard the cutter Charles David Jr., crew members sometimes recognize faces among the roughly 900 migrants who have crossed the decks since 2013. A family with a 4-year-old girl has shown up twice, and other migrants have confessed to getting caught half a dozen times or more.

Although Lt. Cmdr. Kevin Beaudoin calls the migrants his guests, some can’t be pacified. Past guests have lashed out at crew, refused food and water or tried to hurt themselves, hoping to win a transfer to Florida. (That rarely works.)

“They’re humans; they’re trying to make a better life for themselves. They’re not just trying to come to the U.S. to freeload. We’ve had some that have been on board six, seven times, and there’s definitely desperation there,” said Boatswain 2nd Class Matthew Karas, watching over the migrants.

The Cuban Embargo, Through the Eyes of Cubans

In their wake, the Coast Guard burns or sinks migrants’ rafts. Lately, Beaudoin has noticed many rafts primarily made from construction spray foam, enforced with rebar and wrapped in vinyl tarps. These won’t sink, and the Coast Guard rigs them with transmitters that alert other vessels to the obstacle in the water.

“You look at all the risks that they’re taking on those ventures and not being successful, and yet not being thwarted enough to say, ‘I’m not going to do it a 16th time,'” Beaudoin said, squinting into the sun’s glare off the water. “One can’t underestimate the power of the motivation of the migrant trying to enter the United States.”