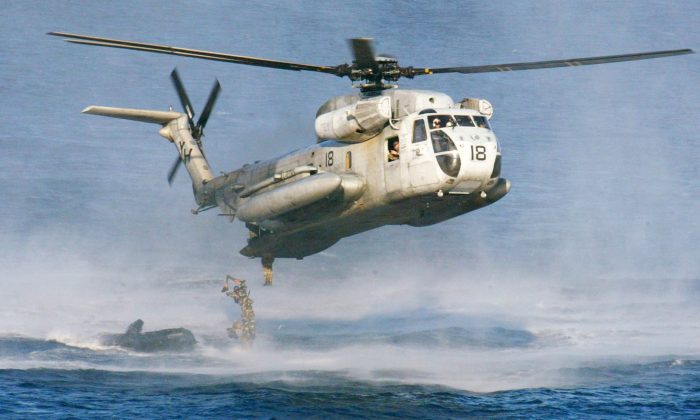 U.S. Marines and their Philippine counterparts jump from a U.S. Marines CH-53D Sea Stallion helicopter at Ternate in Cavite province south of Manila on Feb. 18, 2003. The U.S. Coast Guard says two similar Marine helicopters have collided off the Hawaiian island of Oahu on Jan. 15, 2016. (AP Photo/Bullit Marquez)
US

Rescuers Look for 12 Aboard Marine Helicopters That Collided Off Hawaii

HALEIWA, Hawaii—Two Marine Corps helicopters carrying six crew members each collided and went down off the Hawaiian island of Oahu while on a nighttime training mission, and rescuers searched choppy waters Friday where debris had been sighted, military officials said.

There was no immediate word on the fate of those aboard or what caused the accident.

The choppers are part of the 1st Marine Aircraft Wing at Marine Corps Base Hawaii. Known as Super Stallions, they are the U.S. military’s largest helicopter, capable of carrying a light armored vehicle, 16 tons of cargo or a team of combat-equipped Marines, according to a Marine Corps website.

Elaray Navarro, a retiree who lives across the street from the beach, said she heard two booms late Thursday that were loud enough to shake her house.

“I threw my blanket off, put my slippers on and ran outside thinking it was a car accident,” she said.

She expressed concern for the crew as she watched the pounding surf from a beach in Haleiwa.

“I pray to the man upstairs to help them. To bring them home safely,” she said.

About two dozen Marines gathered Friday morning on the beach at Waimea Bay, a popular surfing spot a few miles from the rescue operation.

A steady rain was falling on the North Shore just before daybreak, and rough water conditions were forecast.

A swell approaching the area was to bring dangerous 30- to 40-foot waves to beaches and 10- to 20-foot seas near the rescue operation, National Weather Service meteorologist Matthew Foster said. Winds were expected to be relatively calm at 10 mph or less.

The crash comes less than a year after the Marine Corps’ hybridized tilt-rotor aircraft crashed in during a training exercise, killing two Marines. The MV-22 Osprey went down last May with 21 Marines and a Navy corpsman on board.

In 2011, one serviceman was killed and three others injured when a CH-53D Sea Stallion chopper crashed in Kaneohe Bay, Hawaii.