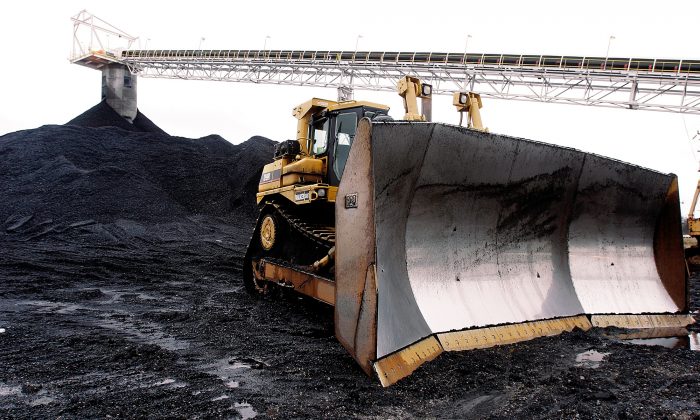 A large bulldozer sits ready for work at Peabody Energy's Gateway Coal Mine near Coulterville, Ill., on March 9, 2006. Illinois' coal production, which peaked in 1918 with a work force of more than 100,000, took a beating in the 1990s after the Clean Air Act required coal-fired power plants to either burn low-sulfur coal or install costly scrubbers to curb the emission of sulfur dioxide, a cause of acid rain. (AP Photo/Seth Perlman)
Opinion

Coal, our cheapest and most abundant power source, is in big trouble in the United States. Over half of the mines and miners in Central Appalachia are now idle and dozens of American coal companies are currently bankrupt. Like Alpha Natural Resources, Arch Coal, and Patriot Coal, all of which filed for bankruptcy in 2015, Peabody Energy Corporation, the world’s largest private-sector coal company, filed for Chapter 11 Bankruptcy Protection on April 14.

New Yorkers may feel that there is no reason to worry since the state gets only 4 percent its power from coal (and so pays the 3rd highest electricity rates in the nation). Many in the natural gas, nuclear, and hydroelectric power sectors even regard coal’s demise as an ideal opportunity to increase their market share at coal’s expense.

This is a huge mistake. While coal is currently the primary target of climate change activists and their allies in government, environmental extremists are out to destroy all of America’s primary energy suppliers.

Take the Sierra Club, for example, a group that boasts on their website that they are “the nation’s largest and most influential grassroots environmental organization—with more than two million members and supporters.”

In their “Energy Resources Policy,” adopted by Sierra’s Board of Directors on Oct. 22, 2015, is a list of the “Resources Opposed by the Sierra Club”:

In other words, they oppose the conventional power sources that supply almost all of the world’s energy.

In their place, Sierra support unreliable and expensive energy sources like wind and solar power, immature technologies such as ocean power, and insufficient sources such as geothermal and small hydroelectric. None of these can replace our primary energy sources any time in the near future.

The climate scare is environmental extremism’s latest weapon. For example, to please environmentalists in his base, President Obama is planning to impose severe carbon-dioxide (CO2) emission regulations on the electricity sector through his Clean Power Plan (CPP). Pressured by groups like Sierra which expect us to believe that we can forecast future climate states, and even more outrageously, that we can control them, state and national governments across the world are doing the same.

This puts coal-fired electricity directly on the firing line as it emits more CO2 than do other sources.

Many in the natural gas, nuclear, and hydroelectric power sector seem to believe that they can get a pass from environmentalists since their products produce less CO2 than does coal. Capitulating to popular but scientifically dubious climate change concerns, they promote their products as “green solutions” to global warming and extreme weather.

Trying to appease environmental extremists is obviously a dead end for nuclear power, which activists oppose even more vociferously than they do fossil fuels. But it is also a mistake for natural gas and hydro.

The CPP treats natural gas merely as a transitional fuel, providing incentives for power producers to eventually move away from gas to renewables. And the Environmental Protection Agency’s latest moves to regulate methane because of the climate concerns will severely impact the industry.

Hydroelectric companies should fear the climate scare as well. After all, vast quantities of methane are released when wetlands are flooded for hydroelectric dams. And besides, the primary greenhouse gas in the atmosphere is water vapor and far more water evaporates when it is held high above sea level in large surface area lakes than when it is allowed to drain naturally to the ocean. If governments continue to yield to environmental extremism, draining reservoirs may be next on their wish list.

Rather than trying to take advantage of the war on coal being waged across America, representatives of the natural gas, nuclear, and hydroelectric sectors, and citizens who live in states that rely on these sources, must join forces with coal to fight environmental extremism. Otherwise, they will be picked off one by one just as described in the somber poem by Protestant pastor Martin Niemöller, an outspoken foe of Adolf Hitler:

“First they came for the Socialists, and I did not speak out—Because I was not a Socialist.

“Then they came for the Jews, and I did not speak out—Because I was not a Jew.

“Then they came for me—and there was no one left to speak for me.”