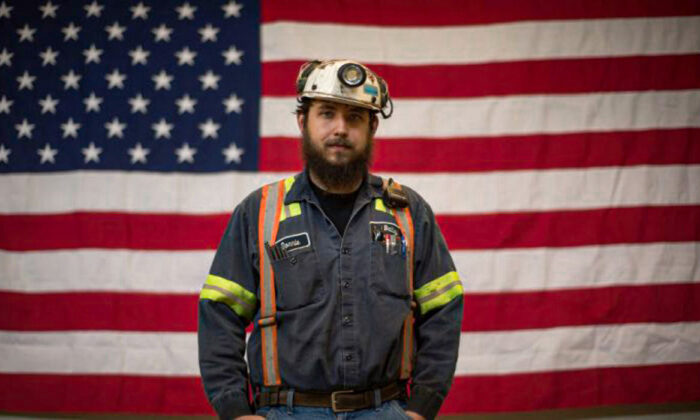 Donnie Claycomb, of Limestone, W.Va., who has been mining for six years, stands in front of an American flag prior to an event with U.S. Environmental Protection Agency Administrator Scott Pruitt at the Harvey Mine in Sycamore, Pa., on April 13, 2017. (Justin Merriman/Getty Images)
Viewpoints

The big winner in the rightly decided West Virginia v. Environmental Protection Agency (EPA) Supreme Court decision announced last week was … made-in-America coal. This decision will rein in the strategy of unelected zealots running regulatory agencies who wish to shut down energy sources such as natural gas and coal without congressional approval.

The left hates coal, and the Biden administration has doubled down on the war on coal—and coal miners. If they had their way, coal would be outlawed and the industry would be dormant. Their argument is that coal is a major contributor to climate change and therefore, the planet needs to stop burning it. I’ll address in a minute why the Biden strategy will do almost nothing to change worldwide coal consumption.

But for now, let’s establish some basic facts about U.S. coal.

First, this country was built on coal. The industrial revolution of the late 18th century that led to the mass production of manufactured goods and services—from homes to factories to farms to our railroads—was unleashed by the nation adopting coal as a source of reliable, cheap, and abundant energy. Coal is so super-efficient as an energy source that it has reduced the cost of mass-producing everything and thus has reduced poverty everywhere in the world.

Second, we have the cleanest coal. The coal that we mine and burn today is far cleaner than the black sooty smoke that belched out of factories in Pittsburgh and Detroit 60 years ago. Our environmental standards are far stricter than those of other nations that produce coal.

Third, coal is an irreplaceable part of the energy mix. At one time, it accounted for about half of our electric power production. Today, we still get almost one-quarter of our electricity from coal. Even if we continue to transfer to “green energy,” we’ll always need coal as a backup generator of power for those times when the wind isn’t blowing and the sun isn’t shining.

Fourth, the United States has 500 years‘ worth of coal—more than any other nation. We are—or should be—the Saudi Arabia of coal.

Fifth, the rest of the world is using record amounts of coal. Germany has admitted that it’s turning back to coal because green energy was too expensive and too intermittent to keep its factories running. Sadly, we still haven’t learned that lesson.

What about climate change? Doesn’t the heating of the planet justify ending coal production? In a word, no.

Even if coal were causing warming of the planet, destroying the U.S. fossil fuel industry—and putting our energy reliability and security at risk—is no way to turn down the heat. The Obama/Biden war on coal (via EPA) isn’t reducing world consumption or global carbon dioxide emissions; it’s shifting production away from U.S. clean coal to Chinese dirty coal. Over the past decade or so, the United States has reduced its coal production by about half. But China has roughly quadrupled its coal production—even as it promises in international agreements to cut pollution levels.

Beijing doesn’t have an EPA. The communists don’t care about climate change. They’re too busy trying to take over the world and replace the United States as the world’s superpower.

All President Joe Biden is doing is replacing clean coal from West Virginia, Wyoming, and Pennsylvania with dirty coal produced in China, India, and Africa. Coal prices have nearly tripled in recent months, so our rivals are getting rich at our own expense. They’re laughing all the way to the bank.

America’s war on coal doesn’t help the environment. It makes no sense from an economic, geopolitical, or national security perspective. This must explain why Biden is moving full speed ahead to shut it down.