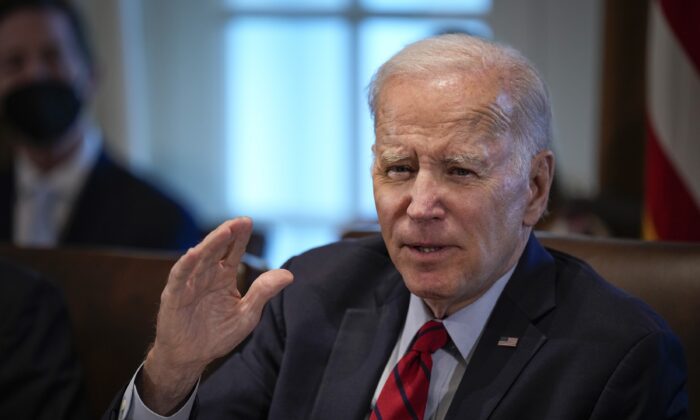 President Joe Biden speaks during a Cabinet meeting in the White House in Washington on Jan. 5, 2023. (Drew Angerer/Getty Images)
By Zachary Stieber

President Joe Biden’s administration is abusing federal law with its new program that is set to grant tens of thousands of immigrants authorization to live and work in the United States, a new lawsuit alleges.

Federal law enables the secretary of homeland security to grant “parole” to illegal immigrants after determining, on a “case-by-case basis,” that an immigrant is facing a humanitarian issue or that allowing the person stay in the country would have a “significant public benefit.”

But the administration is enabling tens of thousands of immigrants from four countries, including Venezuela, to receive parole after going through a background check and convincing a person already inside the United States to sponsor them.

The program “flouts, rather than follows, the clear limits imposed by Congress,” a new suit from Texas and 19 other states charges.

It’s asking a federal court in southern Texas to declare the program illegal and order the administration to bring it to a halt.

“The Biden open borders agenda has created a humanitarian crisis that is increasing crime and violence in our streets, overwhelming local communities, and worsening the opioid crisis,” Ken Paxton, the Republican attorney general of Texas, said in a statement.

“This unlawful amnesty program, which will invite hundreds of thousands of aliens into the U.S. every year, will only make this immigration crisis drastically worse.”

The Department of Homeland Security (DHS) did not respond to a request for comment.

The program was launched in the fall of 2022, based on a parole program for Ukrainian refugees. Only Venezuelan nationals were initially offered the opportunity to apply for parole. Administration officials said they would grant parole for up to 24,000 Venezuelan nationals.

The administration expanded the program to nationals of three others countries—Cuba, Nicaragua, and Haiti—in January, and also announced it would accept up to 30,000 immigrants per month from across the four nations.

Under the program, immigrants must apply ahead of time for parole by providing the name of a person who will agree to financially support them if they’re approved. The immigrant must also pass a background check and present themselves at a Port of Entry, rather than entering the United States illegally.

Immigrants can claim certain criteria to circumvent Title 42, a public health order that enables U.S. authorities to expel many illegal immigrants. The criteria include being pregnant and not having access to “safe housing” in Mexico, according to a review by The Epoch Times.

Immigrants who illegally cross the border are barred from the program, administration officials said.

“We’re trying to make it easier for people to get here, opening up the capacity to get here, but not have them go through that god-awful process,” Biden told a joint briefing with the presidents of Canada and Mexico earlier this month, describing the journey north.

‘Does Not Have the Authority’

In official documents outlining the new process, DHS says it will process applications on a case-by-case basis and grant two years of work authorization to those who are approved. The agency cites the parole ability given to the secretary by Congress.

But Texas and the other states allege that authority is being abused, noting that under the program as many as 360,000 immigrants will be allowed into the United States.

“The Department does not have the authority to invite more than a third of a million more illegal aliens into the United States annually as it has announced with this program,” the suit says.

Parole powers were being used too broadly, Congress said in 1995 before adding limitations.

“The text of section 212(d)(5) is clear that the parole authority was intended to be used on a case-by-case basis to meet specific needs, and not as a supplement to Congressionally-established immigration policy. In recent years, however, parole has been used increasingly to admit entire categories of aliens who do not qualify for admission under any other category in immigration law, with the intent that they will remain permanently in the United States. This contravenes the intent of section 212(d)(5),” a congressional report stated at the time.

The limitations were making clear that parole was only allowed on a “case-by-case basis … for urgent humanitarian reasons or significant public benefit.”

The new program harms states like Texas because the states are increasingly having to spend money and resources dealing with illegal immigrants amid the border crisis that has developed since Biden took office, the states said.

“The program will result in increased crime and drug trafficking in Kansas communities, requiring additional expenditures by Kansas law enforcement. This is because at least some proportion of those aliens will come to Kansas,” it stated. “That means more people in Kansas, at least some proportion of whom will engage in illegal activity and whom law-enforcement officials will inevitably encounter.”

The government also violated federal law by not allowing for public comment before implementing the new program, the suit alleges.