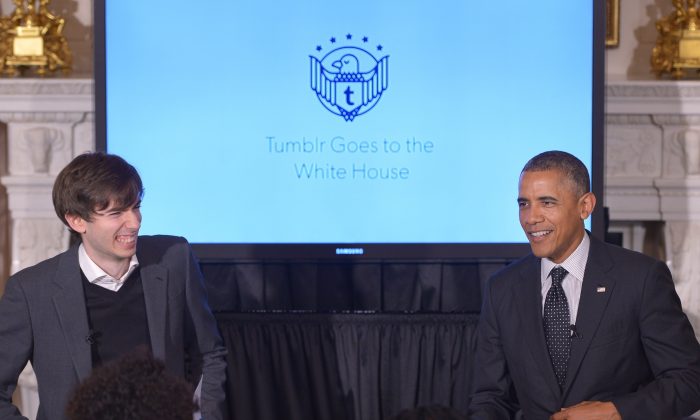 President Barack Obama at an event on the blogging site Tumblr, in the White House in Washington on June 10. At left is Tumblr Founder and CEO David Karp. (Mandel Ngan/AFP/Getty Images)
News

President Barack Obama promised to create “a new era of openness” on the first day of his first term. It’s a sad irony that his administration has continued the 20-year trend of being less and less open to journalists. It has prosecuted leaks and leakers, threatened journalists with jail, denied credentials, and established policies that restrict federal officials from talking to reporters.

The Society of Professional Journalists (SPJ), which I belong to, sent the president a letter July 8.

It said, “You recently expressed concern that frustration in the country is breeding cynicism about democratic government. You need look no further than your own administration for a major source of that frustration – politically driven suppression of news and information about federal agencies. We call on you to take a stand to stop the spin and let the sunshine in.”

Even today the White House website trumpets the beauty of openness. It says, “President Obama is committed to making this the most open and participatory administration in history. That begins with taking your questions and comments, inviting you to join online events with White House officials, and giving you a way to engage with your government on the issues that matter the most.”

But when I call a federal official it does not feel so open. As the SPJ letter describes, federal media contacts act as gatekeepers. They set themselves as the sole point of contact, and it’s pretty common for the words they say to be empty talking points. I talked to one about something moderately controversial, and he seemed to panic and asked that I not quote him at all. The official I was trying to reach? Not a chance. I went to a telephone press conference and was astounded when the moderator said the whole thing was “on background.” Why would you even call that a press conference?

So when I read today’s White House post about being the most open administration, I had to think carefully about what must be meant by that. From direct experience, I know it is not the most open to reporters.

What I do see there, no disrespect, could be called window dressing, inviting a bunch of citizens to play with the president and with digital toys. President Obama Answers Your Questions in a Google+ Hangout. A Tumblr Town Hall. You know, I think the first text I ever got was from then-candidate Obama. So this administration is good with the technology but maybe not as good with actually letting us, the Fourth Estate, engage with it.

The Open Government Initiative Obama announced in January 2009 has borne some nice fruits. Thanks for the online charts and the data, executive branch. We journalists do love digital data. But it’s no substitute for real conversations with real people in government. And those have been more and more hard to have.

I speculate that once a person, including a hope and change person, becomes president, he sees things differently than he did as a candidate. He becomes protective. The Bush administration started this trend. Obama campaigned against it and then succumbed to it, as far as I can tell.

But it is important to have the courage to be open.

This is what SPJ, and I, are asking the president to do:

“We ask that you issue a clear directive telling federal employees they’re not only free to answer questions from reporters and the public, but actually encouraged to do so. We believe that is one of the most important things you can do for the nation now, before the policies become even more entrenched.”

Thirty-eight groups signed the letter. It is unprecedented. SPJ “urged journalists to join them in fighting these trends in public and private entities at the national, state, and local levels. News outlets can resist these trends by publishing editorials, explaining the tactics in news stories, and openly resisting them whenever they occur,” according to its press release.

I will, and this column is a start.